On 6 January 2009, Gregg Mays contacted Chris, claiming to be an employee of Nintendo. Mays said he had been assigned to redesign Sonichu.net as part of the cross-promotion of Sonichu and Animal Crossing.

However, "Gregg" was really Clyde Cash in disguise, seeking vengeance for the suicide of his little brother a few weeks earlier. By 8 January, Chris entrusted Clyde with the password to the site, and in no time at all the site was vandalized. Unable to access the site to restore it, Chris accused "Gregg" of being a troll and changing the password to lock him out of his Tripod account. Clyde claimed he couldn't access the site either, and suggested that he could restore it if Chris reset the password to his account. Chris complied on 10 January, and soon the account was deleted altogether.

Apparently, Chris did not see the second revelation message, thinking it was Jason falsely using another alias. After all, Chris had long considered Howell to be the mastermind behind all of the trolls, while Clyde was then new to the scene.

Chris proceeded to send the real Jason an angry voice mail, and gloated about this in response to a bewildered Clyde. Unaware of any of this, the real Jason checked his phone messages, and this is what he got... 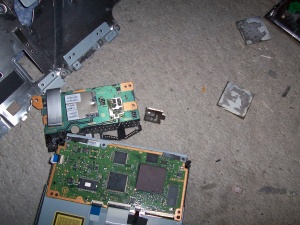 What he intended to do to Jason

Jason Kendrick Howell...you BASTARD!
BASTARD!
You hacked into everything! You have driven me so beyond the wall, I can't even DESCRIBE it!
YOU'RE LAUGHING NOW, BUT... 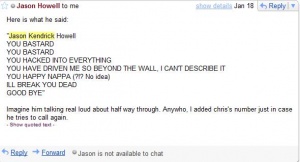 Original e-mail with text of Chris's threat to Jason

There is some debate over whether Chris is actually saying "I pray you dead" or "I'll break you dead". Many opt for the latter, because the image of Chris going into tard rage mode and snapping Jason in half (or rather clumsily attempting to) is quite amusing. Jason himself originally transcribed the message with Chris saying "YOU HAPPY NAPPA (?!? no idea)", rather than "You're laughing now" (or is it "You're laughing dammit"?). Given his history of communications problems, even Chris himself may have had no idea what he was trying to say.

Chris would attempt to re-establish his Sonichu website several times, only to be hacked and vandalized as before. In time, Chris would view Clyde Cash as the leader of the trolls, shifting his ire away from Jason. Throughout 2009, Chris would produce numerous videos directed at Clyde, threatening him, pleading with him, or challenging him.

The rage expressed in the message would become a familiar refrain in later sagas, as Chris would often cap off a round of trolling by screaming at his camera and uploading the footage to YouTube.