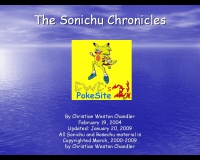 Intro to The Sonichu Chronicles. Hey, at least he didn't make his own background.

The Sonichu Chronicles is a PowerPoint presentation put together in January 2009 by Christian Weston Chandler and submitted to Shigeru Miyamoto and Reggie Fils-Aimé as a proposal for the creation of a series of Sonichu-related video games. It mostly describes the history and successes of the Sonichu franchise and describes absolutely nothing about the games beyond their possible titles. According to the file details, he spent six and a half hours making this PowerPoint and went through twenty-six revisions - a surprising amount of effort for Chris, especially when compared with fulfilling obligations in later years. 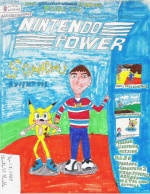 Good thing they won't have to worry about designing their own artwork...

Text of the slides

The text from the slides is presented here exactly as it is in the slideshow, save for added wikilinks. All the following spelling errors belong to Chris.

Evolutions for the Original Sonichu and Rosechu.

(What follows the above are some drawings of Sonee, Rosee, Sonichu, Rosechu, Metonic, and Vamprosa. Also shown is the evolutionary line of Sonichu and Rosechu.)

And with every thought that randomly popped up in my imagination, I was very likely to create a new character, or even given one from a fan among my Growing to Currently MASSIVE Fanbase.

(This slide contains a veritable assload of drawings, including but not limited to drawings of Simonla, Jiggliami, Bionic, Megagi La Skunk, Mary Lee Walsh, jerkops, Magi-Chan, Patti-Chan, and Zapina.)

In any case, it all happened IN and AROUND the City of Cwcville, Virginia; A Grand Community of men, women and children living at peace day by day, and hard at work. A Plus for the City is that it is SMOKE-FREE and NON_ALCOHOLIC. At one end of the city is the Cwcville Shopping Center, featuring many favorited stores, as well as My Mayoral Office above the Front Main Enterance. Followed by the Residential Area of Houses and a few Playgrounds, then the Metropolis where the Major Business go to work in the tall skyscrapers. It also has a beach, leading to the ocean, a big forest and mountainous regions with a dormant volcano or two.

(This slide has another assload of drawings - they show a mountain, a mall, a house, and a lot of the Sonichu cast.)

Christian Weston Chandler – My role in the Comics

Like most artists, I let myself get into my work. Story-Wise, while IN REAL LIFE, I’ve been in my Search for a woman to become my True Sweetheart From the Ground-Up, starting with simple friendship, I am also the Mayor of Cwcville; I deal with my Mayoral duties over Wi-Fi with my Nintendo DS.

I came up the name of Cwcville LONG AGO starting from my City I built and grew bigger over the years of Lego Bricks, Pieces and People. I also later came up with the Radio Station, K.C.W.C. when I recorded a couple of Radio Shows for fun onto audio cassette tapes.

In Real Life, I also created a number of Websites, starting with my PokeSite. I had Taken TWO HTML classes, so I know the Raw on Notepad, as well as the Netscape Composer HTML Processor.

After creating Sonichu, I featured him on The PokeSite, then I later decided to Make the Sonichu Site as a Spin-Off from The PokeSite.

Then eventually, the Sonichu & Rosechu Fanbase GREW, and with the True, Good Fans, came the Jealous, Dark Trolls/Internet Bullies. I was hacked a number of times Before. And unfortunately, the Sonichu Site Is temporarily down, but as soon as I get Some more money, I’m going to open up A NEW account with either Tripod, or a Different Website-Hosting site, with a new E-mail address I have kept secret from most anyone; I’ve informed my family.

And Now, the Gaming Proposition.

Off to a Zappingly Great Start.

As of January 18, 2009, Takashi Tezuka took it upon himself, and with a most Appreciated Inquiry for my Approval, as the Original Creator of Sonichu, Rosechu and the World of Cwcville, to create a Sonichu and a Rosechu Villager for Animal Crossing City Folk (Now, we’ll be likely to be Zippin’ along “Sonichu Crossing”; Mind the Traffic).

I often like to quote Blathers after going on and on with the expression, “But I digress”, so thank you all for teaching me that expression.

Sonichu, Rosechu and Cwcville; Nintendo will Be PROFITTING BIG from my Well-Grown Fanbase!

Thank you very much for your time, and I look forward to working with each of you all in Person very soon on the Sonichu Alpha Project.

(Dox and a photo of a vacant-looking Chris wearing his medallion.)

Upon receiving the Sonichu Chronicles, Reggie Fils-Aimé was outraged that one of the first images in the presentation showed an upskirt view of Rosechu, allowing the viewer to see her cameltoe. Fils-Aimé immediately canceled the project, noting that Nintendo is in the business of producing all-ages software. Christian blew this issue out of proportion somehow concluding that Fils-Aimé was objecting to nudity and heterosexual romance, and from there deciding that Fils-Aimé is a chain-smoking, alcoholic homosexual prude.