From CWCki
(Redirected from Pokémon: Lightning Version)
Jump to navigation Jump to search 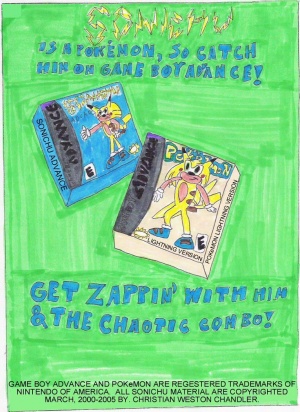 It was supposed to come out on GBA. Guess what? For some reason, it didn't. Also, notice the spelling mistake in 'Advance' that was poorly corrected. Honor roll, my ass.

The prospect of creating an official Sonichu video game is one of Chris's long-lasting delusions. Being the total fucktard he is, he wants Nintendo and Sega (and possibly Sony) to team up and create this game starring his shitty excuse for a character. But, as in many other areas, Chris is not very loyal to anyone, and, because of this, he is almost as easily tricked by trolls pretending to be game developers as he is by trolls pretending to be girls. 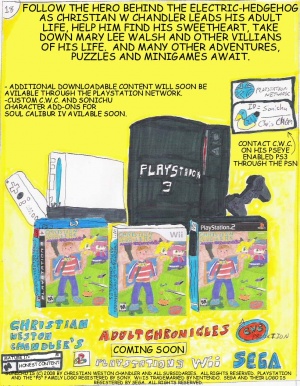 Unfortunately for people who want to make sense of the whole mess, Chris is extremely vague about what he envisions his ideal games to be. He seems to come up with different game ideas and names, without really bothering to make them too different from each other. The game ideas seem to come and go based on the systems Chris has owned and used at the time, and he seems to be perfectly willing to let the game designers take full charge of every aspect of naming and design these games, as long as his vague parameters are followed.

Chris hasn't, however, stated some very basic gameplay details, such as the supposed genres of the games; Pokémon: Lightning Version is easy to figure out, but the rest is anyone's guess. He is possibly picturing the games as some sort of a continuation of the 3D Sonic game series, with Chris scoffing at the idea of the games being in 2D (and offering no information beyond that). All this is highly alarming because even the most clueless fangame designers can usually get this much done. Chris spends much more time pitching the game idea itself and considering his personal involvement with the project (making advertisements, and offering to act as a voice actor) than he does on thinking about the actual gameplay.

Ironically, Chris's dream of a Sonichu game, at least based on Miyamoto saga is that his Sonichu game isn't even really about Sonichu but rather pushing for Christian Weston Chandler's Adult Chronicles, where Sonichu and Rosechu are minor characters with the main focus on Chris struggling to adjust to adult life.

The Sonichu game was planned to be released on all consoles except the HEXBox 360, due to Chris's pathological Sony-fanboyism and/or his unwillingness to spend his monthly tugboat on an online connection rather than games. Chris is also hoping the games to be developed on both PlayStation 2 and PlayStation 3, in spite of the fact that PlayStation 2 has been put on the back-burner as far as most developers are concerned.

Why all this is futile

Main article: Chris and the industry

Plain and simple, none of the media companies want unsolicited ideas from the public. There are several reasons for this. While companies do market research and figure out whether the time is ripe for games, they rarely take direct input from gamers on what kind of games they should publish. There are time constraints; a publisher would need to deal with a huge volume of ideas, all of which would need all due consideration. There are legal constraints; if a company rejects the idea, they have to agree to never implement a similar idea even if they came up with it on their own, or the dejected fan might sue them for idea theft. Ideas also take considerable time and energy to be actually implemented. Finally, Chris is in no position to make demands to Nintendo and Sega, since it is, ultimately, they who hold the copyrights to Pikachu and Sonic.

Sonichu Adventure was a game Chris planned to release for the Nintendo GameCube and Game Boy Advance systems before deciding that he was a far more interesting topic for a game, and diverted his attention towards Christian Weston Chandler's Adult Chronicles.

Sonichu Adventure was one of the ads in the first issue of the Sonichu comic. In true Chris style, the design of the game never went beyond a mocked-up bit of boxart and a Nintendo Power magazine cover that displayed the depths of Chris's awesome talent.

Chris's basic statements about the game in the video Chris dispels videogame rumors indicate that the game would have had branching single player story paths, each following different characters. Wild Sonichu would be questing to find his lost father, Bubbles does some stupid bullshit at an amusement park, Angelica has to defend her new church against some unnamed enemy, Punchy goes out looking for a new challenge (whatever that means), and Sonichu accepts some kind of challenge from Metal Sonichu. Chris also says that Magi-Chan would have been involved in some way as well, but Chris never thought of an idea for what he could do.

Sonichu Advance was Chris's proposed Sonichu game for the Game Boy Advance. The title indicates that it would have probably been a ripoff of the Sonic Advance series, which are GBA installments of Sega Genesis-style Sonic games with sprites updated to the Sonic Adventure art-style, and other graphical improvements.

Sonichu Advance first featured in an advertisement in Sonichu #0. It also appeared on Chris's second Homemade Nintendo Power magazine cover, as featured in his Sonichu Chronicles PowerPoint presentation for Nintendo.

Pokémon: Lightning Version was a Pokémon game for the Game Boy Advance that Chris planned on releasing, possibly at the same time as Sonichu Advance. Not much is known about this game, as Chris said very little about it, even in advertisements, other than implying you would get to "catch" Sonichus at some point. Chris merely stated that " I have the idea for the story beginning in my head" and that it would feature "Babies for ALL the Sonichus and Rosechus (minus Blake) and Evolutions (For Original Sonichu and Rosechu ONLY)."[1]

Originally, Chris was determined to see Sonichu made into a game, but based on his interactions during Miyamoto Saga and in The Sonichu Chronicles, Chris seems more determined to make his own game all about him and his failure to adjust to adult life.

Chris's wish to have his life made into a game did come true in 2014, when a demo for a fan-made RPG version of Christian Weston Chandler's Adult Chronicles was posted. Chris took notice and responded angrily.

Chris had also intended to release DLC for certain games related to Sonichu.

Chris's plea to his fans

In mid-2008, trying to cash in on what he believed to be a massive fanbase (in actuality, trolls pretending to be fans), Chris implored his fans to be his personal army and beg Nintendo, Sega and Sony to make his game (because they'd probably stopped responding to Chris even with form letters).

In Captain's Log, Stardate August 28th, 2008 Chris described what he envisioned for the upcoming Sonichu game being developed by JK Productions. Chris also set up a (now deleted) blog dedicated solely to the game development. JK Productions later turned out to be trolls and cut off all ties with Chris. Chris went back to harassing Nintendo executives shortly afterwards.

In the beginning of 2009, Chris thought he was in talks with Nintendo about releasing the game on the Sony platforms, exchanging several emails with trolls posing as Shigeru Miyamoto, Takashi Tezuka and Reggie Fils-Aimé among others. He was of course being trolled, as part of an elaborate scheme set up by his future arch-nemesis, Clyde Cash.

Of particular interest here, (from the game design point of view, as well as deciphering Chris's intentions), was the PowerPoint presentation he made for Nintendo. Yet, even this presentation will disappoint most people greatly: one slide that maybe even dares to mention the topic of the discussion at hand - to wit, the Sonichu games, and all the rest about his comic and Chris himself.

Being a level designer game, Chris quickly became obsessed with LBP in later 2008, as it allowed him to finally live out his dream of creating the Sonichu video game he had always wanted. He created two or three sub-par levels based around Sonichu and then forgot about that idea completely, instead making levels about the PS3 itself, his then current sweetheart and later, owls. Thus even Chris gave up on making a Sonichu game, content with his single unplayable Sonichu level and Sonichu themed Sackboy costume.