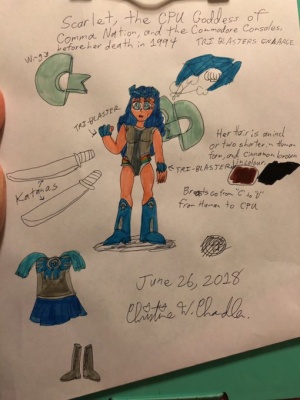 Scarlet, CPU Goddess of the Comma Nation and Commodore Console. 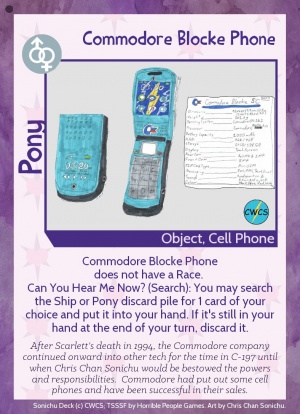 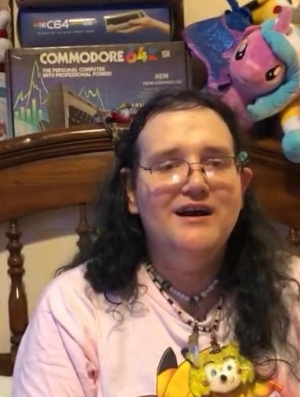 The Commodore displayed above Chris's bed.

The Commodore 64 is an 8-bit home computer and game console, manufactured from 1982 to 1994. It was Chris's first game console; Bob bought one soon after its launch, and Chris learned to operate it at a very early age, before he could even speak.[2] Bob apparently programmed a ring-stacking game for the system. Other games the Chandlers owned included Pitfall!, Q*bert, Pole Position, Donald Duck's Playground, Muppet Adventure: Chaos at the Carnival, Tetrad, Sargon II, Defender, Centipede, Blue Max, Donkey Kong, and Charlie Brown ABCs.[3]

Chris was always careful to clarify that his first game system was the Commodore, showing that he had some sentimental attachment to it; however, he attempted to sell it on eBay for $40 in 2008.

On 14 June 2018, Chris released a video asking for a local technician to help get his old Commodore working again. As it turned out, his interest in the Commodore was sparked by his belief in a CPU goddess named Scarlet, a.k.a. Blue Heart.

In August 2018, he mentioned in The Awakening of a CPU that he is the CPU goddess Blue Heart. Subsequently, he changed his Twitter bio to note that he is a "CPU Goddess of the Nations of Cwcville, Comma, and the Commodore Consoles."[4] As of 2020, the Commodore box was displayed above Chris's bed.[5]