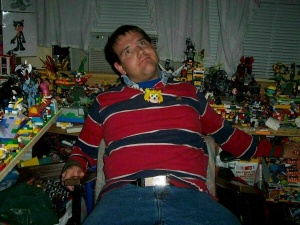 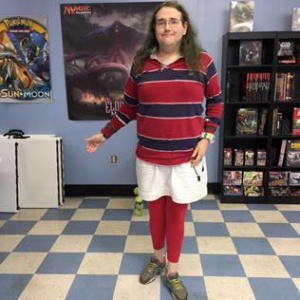 The Classic is a red and blue (seemingly Ralph Lauren brand)[2] rugby shirt formerly worn by Chris from sometime before 2 February 2004 to when he became a Tomgirl in 2011. It was initially thought to be lost in 2014 to the house fire at 14 Branchland Court, but had survived at the bottom of a soaked and grimy garbage bag full of clothing. Prompted by the Financhu Crisis, Chris went searching for it in April 2017, hoping to sell it to a fan, although no such sale came to pass. As of August 2018, the original shirt is lost. As of October 2019, Chris owns a 'Mark 2' Classic, almost the same as the original but sporting orange and blue instead of the original red and blue.

The Classic makes its first drawn appearance on Chris's "Christian's Christian" custom Pokémon card, created on 2 February 2004. The same self-portrait also appears on CWC's Sonichu Site as "CWCtoon.jpg". The shirt next appears in the classic Sonichu strip "Christian + Sonichu vs. the Mastermind!" from Sonichu 0, drawn 18 March 2004. In both these early appearances the blue and white colors are inverted. In the classic strip drawn on 8 May 2004 the colors are in the correct order, although there are only two blue stripes rather than the three which the real shirt has. It would be several issues before Chris began drawing the shirt with all three blue stripes. To this day Chris still grossly exaggerates the size of the white stripes and tends to use cyan in place of navy blue.

The first appearance of the Classic on video is in the All I Want For Christmas Is a Pretty Girlfriend clip, filmed on 20 December 2004. The shirt made many more appearances between 2005 and 2009 - Chris wore it on 25 February 2007 during Christian Weston Chandler's FUTURE MESSAGE, the first video he uploaded to YouTube.

The shirt made its last appearance of the classic Chris era on 23 November 2009, when he filmed CWC Personal Sonichu Presentation. On 10 January 2014, 14 Branchland Court was gutted by a fire - the shirt was thought lost by both Chris[3] and his fans until April 2017, when it was found in a bag of laundry that was still damp from the water used to put the fire out. 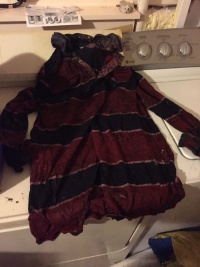 The Classic, after being excavated from bags of hoard, still wet from the water firefighters used to combat the fire three years prior.

Following the house fire and subsequent renovation, the Chandlers moved back into 14 Branchland Court. Naturally, Barb insisted on bringing the hoard back into the house, even the portions ruined by the fire or the efforts to extinguish it. The laundry room became a dumping ground for "a mountain pile" of trash bags filled with water-damaged clothing.[1]

The trash bags festered for three years. In April 2017, when Chris sifted through them in his quest to find The Classic, the contents were laced with mold. Chris, being naive, failed to realize the health risks.

After finding The Classic, and inspired by the successful sale of the Sonic Totem relic for $1,500 two weeks before, he listed the shirt on eBay for $12,000 minimum on 19 April 2017. He immediately snapped a photo of it, then posted it for the listing, not realizing that the mold growth evident in the picture would not entice sales. He later washed it and posted a new photo to eBay, replacing the original one. 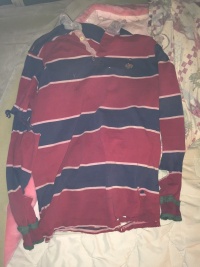 The same shirt after being washed. The holes and other damages allegedly would've been fixed using the funds raised from the sale, according to Chris.

Later, he recorded Live Game Stream - C-Log 04192017 - The Shirt to promote it, donning the shirt for the first time in years (having last worn it in 2009's CWC Personal Sonichu Presentation). Three days later, the auction ended at $25,100. The winning bidder did not pay.

Humorously, Chris fails to realize that $25,100 is a gross overestimate of how much money would be required to repair a piece of clothing, even those affected by water damage. 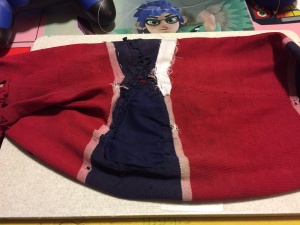 A "masterpiece." Note the poorly-color matched stitching on the arm, with the white thread not fitting the faded white stripes on the shirt at all.

Chris began an effort to restore the shirt on 29 April 2017. The shirt had sustained large tears as a result of neglect. He asked several professional tailors to repair it; however, they turned down the job as being too difficult.[6] Undeterred, Chris set out to fix it himself.

He recorded 90 minutes of him sewing up the shirt and posted several before-and-after photos to Twitter.

A commentator on Kiwi Farms noted the issues with his project[7]:

After "a few hours" of work, Chris declared his effort a "masterpiece" and said The Classic is "worth more" because of it.[8] At the time of that statement, he believed he had already made a sale on it for $25,100.

On 4 May, after five days of work, Chris completed the restoration.[9] He signed it using his transwoman name, and celebrated the job by wearing it in public.

By 2018, the shirt deteriorated. Chris attended TooManyGames with the shirt in June of that year, with photographs of him wearing it at the event showing the shirt practically falling apart, and some of the stitching Chris had attempted to carry out having split or frayed in places. On 4 July, he posted to Twitter asking for Ralph Lauren's help in either reproducing or restoring his shirt.[10] This did not come to pass, and Chris would still regularly wear the rapidly-degrading fabric. By this point, it would be easier to just buy a new one than attempt to repair it.

On 10 August 2018, Chris revealed in a text message to the Teen Troon Squad that The Classic was lost by Barb cleaning his room while he was away at BronyCon. Whether Barb's intention was payback for leaving her for the weekend or out of forgetfulness, Chris responded by hitting and humping a pillow effigy representing his mother in front of her.[11] He would then search for a replacement, which is first seen during the Dimensional Merge Announcements video.

Circa 2005 Chris also wore a short-sleeved shirt with a very similar design but with more stripes. The shirt was much too small for him, even more so than his other shirts. Fortunately he always wore it with another shirt underneath. The shirt's current fate is unknown.