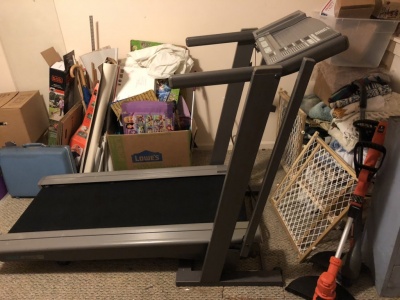 Chris' treadmill in the utility room of his house.

The Speed-Run Path treadmill is a piece of exercise equipment which Chris purchased from Goodwill for ten dollars on 13 December 2018.

On 10 January 2019, Chris made an announcement on Twitter that he had purchased a new belt for his treadmill and was going to have it installed by a professional with the help of Scarlet.[1] He paid $70 for the belt and $125 + tip for the installation[2].

In April 2018, after Idea Guy told him he needed to get in shape in preparation for crossing into CWCville[3], Chris felt motivated to begin going to Anytime Fitness, speed-walking on the treadmill there for exercise - in one tweet, saying he was walking at "4 mph for two hours." Though he was later banned at one location, he continued going to another one.

The exercise stuck with him, as he decided to purchase his own treadmill after seeing a deal for one at Goodwill. On 16 December 2018, Chris uploaded On mah Treadmill, dawgs!, a brief clip of him using his new treadmill walking at a speed of three miles per hour.

On 11 January 2019 Chris began using his treadmill to lose weight for the #BronyBabes challenge. However, a few days later, his attention was diverted to the Twitter blocks from TF2 Analysis crew saga.

The treadmill can be seen in the background of this photo from June 2019, abandoned.

In a June 2019 photo Chris tweeted, the treadmill can be seen in the background, surrounded by junk and abandoned.