CPU Blue Heart (also known as Scarlett Celestia)[3] is the Console Patron Unit Goddess of the Nations of CWCville and Comma, and of the Commodore Consoles. Conceived by Chris after being force-fed Hyperdimension Neptunia lore by the Idea Guys, Scarlett serves as one of his escapist alter egos, providing a coping mechanism and enabling his messiah complex. Through this alter ego, Chris has also emerged as the figurehead of the Dimensional Merge, with his own group of "worshippers".

The Idea Guys and Hyperdimension Neptunia

Chris depicts the time he was possessed by the Dreamcast CPU.

Prior to the Idea Guys, Chris's mental health was already in a fragile state. A contemporary highlight was when he attended BronyCon 2017: At the Grand Galloping Gala ball, an attendant captured footage of Chris dancing by himself among the crowd; in his own retrospect, Chris remembers this ball for the passionate moment when he danced with his OC, Magi-Chan.[4] Also at this time, Chris was sowing the seeds of his belief in other dimensions when he tweeted that "life is a cartoon," because the universe being created by a higher power is akin to Cartoon Network creating their own franchises.[5]

In what was likely the first sign that Chris was being manipulated by the Idea Guys, in early November 2017, Chris posted a plea for prayers for the CPUs, as CWCville had been invaded by the villains of Gamindustri.[6] Filling in the blanks, Chris claimed he was briefly possessed by (a representation of) CPU Orange Heart, Uzume Tennouboshi, after laying his hands on his supercharged Sega Dreamcast. Now endowed with the abilities of a Goddesss, he travelled to his fantasy world to save the day.[7][8] The following month, Chris introduced Battery-Charge Heart, the CPU of CWCville and the Smach Z consoles.[9][10] According to Chris, he devised the character to "prayfully end the war with Australatina, and restore CWCville," but in his lore, the character proved to be a hindrance to the war.[11]

The reign of the Idea Guys would cease around April 2018; however, the outlandish concepts they instilled into Chris would lay the foundations for Sonichu #13, which would be completed that August. It is clear that Chris intended Battery-Charge Heart to be his own Hyperdimension Neptunia CPU in the Sonichu franchise; but with his liberation from the Idea Guys, he would eventually push this character to the sidelines.

The Awakening of a CPU

On 14 June 2018, Chris uploaded two videos requesting the help of a local technician to repair his Commodore 64. As a topic he rarely touches upon, Chris discussing computer hardware was somewhat out of ordinary, even for him. According to Sonichu #13—which at this point in the series, acts as a pseudo-biography for him to "chronicle" his coping mechanisms—16 June 2018 was a prophecized event, in which Chris received the soul, and in turn, the memories and abilities of Scarlet, upon touching his aforementioned Commodore 64.[2] Furthermore, the "prophecy" elaborated that Scarlet's rebirth serves to oppose the return of Neptunia and Sonichu #12-9 villain, Rei Ryghts, accompanied by a dreaded (fictitious) "Atari VCU" console. For several weeks, Chris would remain vague about his newfound alter ego. 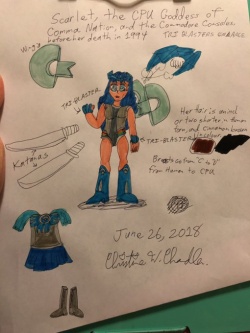 Scarlet, prior to becoming trapped in Chris's Commodore 64

Nearly two weeks later, Chris unveiled Scarlet/CPU Blue Heart – another OC based on Hyperdimension Neptunia.[12] He followed up by posting screenshots of text messages between him and another person on Facebook, which detailed notes on Scarlet. The following is an excerpt:

Despite being defunct since 1994, Chris went on in great detail to describe the next system from Commodore, which would be called the "Commodore CW".[13] In his correspondence, among other posts in July, Chris referred to an unnamed female, who was the recipient of Scarlet's essence.[14][15] In summary, Chris believed that the second coming of a fictional character of his own design would act in tandem with the return of a computer manufacturer which hasn't existed in decades.

Finally, on 3 August 2018, Chris announced on Twitter that he was the new CPU Blue Heart candidate he previously alluded to, when he published the short prose, The Awakening of a CPU aka The Idea Guy Corruptions, which would finalize his work on the Sonichu #13 comic:

Moving forward, he urged his followers to spread the gospel of CPU Blue Heart.[12][17][18]

As noted in his lore, Chris can transform into his CPU form as instantly as shouting "Access!"; he can also transform into a CPU version of his Chris-Chan Sonichu fursona. When not body swapping with Sonichu or Magi-Chan, Chris usually caps off his online posts with the emojis "⚡️💙⚡️", representing his signature as CPU Blue Heart.[19]

Much like the infamous unicorn cosplay, Chris has introduced another element currently dictating his life to his attire – this time, his CPU status. For the duration of BronyCon 2019, Chris's cosplay included a metal wire on his forehead, contorted to resemble the Commodore logo. Back at home, Chris's engagement as CPU Blue Heart has also drawn him closer to his interest in pseudoscience, with his use of magical tools such as wands and crystal-based devices to enhance his CPU abilities.

Supposedly not to break his immense role-playing, Chris has not stated why he chose the Commodore 64 when he has owned several gaming platforms in his lifetime; though, the C64 has been known to hold sentimental value for Chris, as it was his childhood computer and a hobby he bonded with his father over.[20]

Life as a Goddess 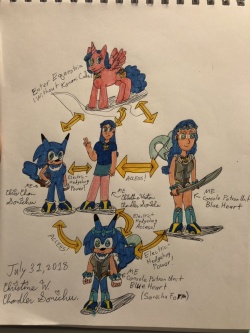 Since at least October 2018, Chris's main vocation as CPU Blue Heart is to act as the overseer of the Dimensional Merge, in which our Dimension 1218 will combine with Dimension C-197—the realm of most fictional franchises—which would bring the creations into our reality. Having stated that people would integrate with their fictional self-counterparts, Chris implies that he would have full rein of his Goddess powers upon completion of the Merge.[22] On paper, it sounds like the draft for a Roger Rabbit style blockbuster; but in actuality, Chris comes off as a bargain bin Harold Camping. With further comparison to the evangelist, when the Merge failed to occur on 1 January 2019, Chris simply recalculated his pending day of judgement.[23] As of present day, the Merge is yet to manifest.

In the early days of Chris's God Quest, he received a number of tributes in the form of artworks of his character.[24][25] One of which was a drawing of a thicc CPU Blue Heart, which left him especially smiteful that day, declaring that "Scarlet was Not fat, and [he is] Not fat either."[26]

As the final nail in the coffin of finding employment, Chris started citing his responsibilities as a Goddess as sufficient reason for not needing a job;[27] he has yet to use his divine powers to conjure up the six figure sum his family owes to various creditors, but has assured a payback of tenfold once the Merge has completed.[28]

CPU Blue Heart sticks it to the man.

In his attempts to persuade Hasbro to continue Friendship is Magic, he frequently invoked his CPU status.[29][30] Notably with the airing of the MLP spinoff Pony Life, Chris (possessed by Sonichu) used the CPU-appropriate blasphemy, "Oh my Chris Chan," to express his sheer disappointment with the show.

When several members of the brony analyst community blocked Chris over a short period of time, Chris created his current Twitter handle, CPU_CWCSonichu, in order to reconnect with his blockers and reduce ween activity, effectively making his original account redundant. In a more bizarre coping mechanism, Chris created a self-insert Lego parody of one of his favorite brony analysts, which features minifigure Chris "accessing" his CPU form. 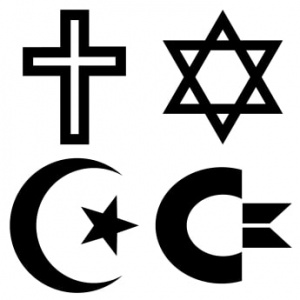 What Chris wants you to believe.

In November 2019, Chris steered a post on Christorians towards brainstorming his own religious following; he named his worshippers "Devotees of Chris Chan Sonichu" (DoCCS), favored over the derivative but potential "CWCanism" as the name of his religion:[31]

It was also around this time when Chris consecrated his home of 14 Branchland Court, now bearing the title of "Temple of Christine Weston Chandler Sonichu".[32] Unfortunately for the Goddess and avid Pokémon GO player, his place of worship was not hallowed enough to be accepted as a PokéStop.[33]

Chris' preference for the philosophic term 'Devotee' — instead of 'worshipper' — stands in contrast to Chris' more overtly religious calls for his followers to "have faith in all the OC's and all the deities" as in his video "Believe in the OC's and Deities!" [1]

As part of his new pet project, Chris commemorated his religious sect when he designed a set of Twilight Sparkle's Secret Shipfic Folder cards based on his following. These included:

In Chris's addendum to Sonichu #13, he explains that the destructive impact of the Idea Guys only strengthened his connection to the sister dimension, which in turn led to Chris fulfilling his prophecy of taking on the mantle of CPU Blue Heart.

In Sonichu #14, the introduction summarizes Chris' journey to becoming a CPU Goddess, and he acquaints the reader with his role in the upcoming Dimensional Merge plot device. Meanwhile, while working on construction of the CWCville Basillicom, Chris's sharicite is activated by an ally named Beth Stevenson, which is never addressed henceforth. In Chris's dream, Chris and Magi-Chan discover a room with a large round table, with a throne assigned to each deity/CPU. Without Chris working on his comic books to publish further pages, the rest of the comic does not address anything of a CPU nature.