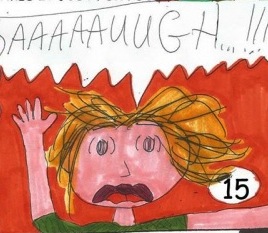 A completely reasonable reaction to an offer of baked goods.

Kevin the Jew is a classmate and the former boyfriend of Cera Rosechu. His first, and so far only appearance is in the Christmas Episode of Sonichu 11.

Cera first mentions him as she shows her mother the special holiday cookie she made for him. Since Kevin is Jewish she decided to make him a cookie in the shape of a menorah candle. Being the thoughtful little creature she is, she decided to make it with vanilla, as Jews are (seemingly) allergic to everything else- except eggs it seems, as eggs are a main ingredient in cookies and Cera fails to take this into consideration.

Kevin and Cera played Call of Duty together on Christmas. Cera quickly proved herself the more capable player, earning "ten million points" by shooting down a plane. However, Kevin's character was carrying too much to run and died in a violent explosion. Cera told him that he shouldn't take the death of a virtual game character so seriously, but Kevin was inconsolable. She tried to cheer him up by giving him the candle cookie, but upon seeing the flame, Kevin screamed and smashed the cookie to bits. The biggest lesson Cera learned from this is "not to display an image of a flame to anyone after an explosion." Even though this is not how PTSD works.

Kevin portrayed Joseph in the Nativity pageant alongside Christine Rosechu as Mary. During Christine's evolution, he improvised in order to stall for time while her father brought her new clothes.

After the play, Cera approached Kevin and apologized, and gave him dreidel-shaped cookies as an apology. He then dumped her with a long-winded speech explaining that he judges potential mates by how they play video games, and she is far too aggressive for him (says the guy who rage quit after his character was killed). He walked off, leaving her a weeping mess (also, he kept the cookies). 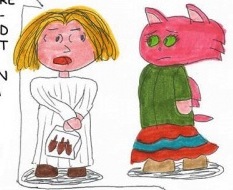 Sorry, Cera... looks like you're stuck as a two-year-old virgin with rage.

He is depicted as being the same height as Cera Rosechu. Since like all Sonees and Rosees she is small enough to be carted around by a three-foot hedgehog, this puts his height at about one foot.[3] Though his age is not expressly stated, he is ridiculously tiny for anyone older than a newborn.

Kevin made his triumphant debut in 2015, wherein it is made clear that he and Cera are dating. Given the fact that Cera is two years old in this story (she was born in 2006, the story is set in 2008[4]), coupled with the fact that he is human while she is a Hedgehog Pokémon, this makes him a zoophile AND a possible pedofork. This is also slightly confusing, as Cera suddenly comes out as a lesbian after her evolution- never showing romantic interests in women before this- Kevin being her only known crush/partner.

Despite his professed religion, Kevin acted in the school's Nativity play. This suggests one of three things: Kevin is a Messianic Jew (a practitioner of Judaism who believes Jesus is the Messiah), Kevin is ethnically Jewish but is not a practicing Jew, or Chris watched Kyle participate in a Christmas play on South Park and just copied the idea.

Kevin's poor reaction to Cera's conduct while playing Call of Duty provides one of the major conflicts of the Christmas story. When his avatar is killed, he bursts into tears and is traumatized to the point where even the image of a flame gives him a panic attack. This seems especially immature considering he's playing a multi-player combat game where one can expect their character to die numerous times. Then when Cera attempts to soothe his wounded ego, Kevin gives a long speech equating her actions in a video game with how good of a person she is. When he dumps her, he condescendingly implies that she is the one who needs to mature. This demonstrates he is not only over-attached to fictional characters, but also a staggering hypocrite. It's not clear whether or not this is intentional, because unlike other conflicts Chris has written, there is not a blatant hero/villain dynamic.

This could also be Chris rubbing the idea women should not be aggressive, and Cera should stick to her job making Kevin cookies.