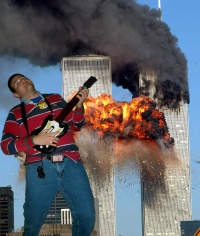 Twin Falling Towers is a video uploaded by Chris on 1 November 2009. An unusually tasteless video, Chris attempts to threaten Clyde Cash by sticking an embarrassing picture of him and Jack Thaddeus in place of the Twin Towers and making childish explosion noises.

Years later, The Man in the Pickle Suit mentioned that this video had been one of many scripted by trolls:

Following outrage to the video – both feigned anger from the Trolls who suggested it in the first place, and genuine disgust from horrified onlookers – Chris uploaded an apology video for his inelegant joke. Unfortunately, the alternate joke that Chris proposed just dug him deeper.

This video was put in the Comedy category. Good job, Chris. 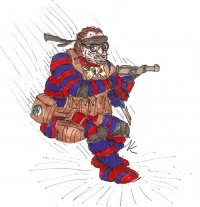 He's as wild as a serial raper!

[Close-up on an image of the World Trade Center before its destruction. Fragments of the photo of "Clyde", that Chris has been using this whole time, are visible through the silhouette of the towers. Laid over the image is a pointing cursor; we are looking at a picture displayed on a computer screen.]

Well now, Mr. Clyde...your same and rutches--your fame and four-chunn shall fall just like these Twin Towers! They go crumbling down, with an airplane!

[Chris moves the cursor towards the "towers."] Nyerrrrrrr! Pffff! [Chris wiggles the cursor around the "towers" to give the impression that they have exploded. He then does a horrible imitation of Strong Bad.] You are weeeeeeeak! I'm the strong wunnnnnn! You are going down, Mr. Clyde Cash! Gnrrrrrr!

Our Hero spotted the video not long after it was posted and offered a brief response reflecting the feelings of many observers.

No Marines have ever been spotted waiting outside of 14 Branchland Court.