Chris's Response to the Terrorism Attacks in Paris 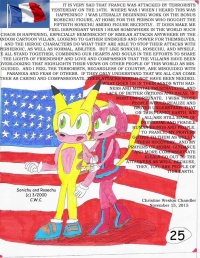 On 13 November 2015, Paris was attacked by a group of terrorists representing the Islamic State of Iraq and Syria (ISIS) in a series of shootings and bombings, killing 130 people, injuring countless others, and plunging France into a state of emergency. Countless other nations and individuals joined together in condemnation and homage. In a display of 'empathy', Chris decided that he would create his own show of grief, albeit two days late, loaded with references to Sonichu and Amiibos, and put it up on Facebook.

He also compares the real-life atrocities committed to the acts of a cartoon villain, suggesting that he either wasn't paying full attention or, more likely, could not understand the substantial difference. He also ends up sympathizing with ISIS and pledges that the terrorists should just stand down and become friends with each other, possibly thinking that an organisation dedicated to establishing an extremist totalitarian Jihad across the world would really listen to a single American citizen with autism. The return of the dreaded stress is ever prevalent in Chris's musings.

However, it is possible to discern a mote of kindness and compassion in Chris's passage, even if it is horribly misguided and vague.

The text is printed on a colorful background, and poorly scanned so that the sentences run off the image on multiple lines. A poorly-photoshopped and small photograph of the French Tricolore can be seen in the top left corner, and the text is layered on top of a much larger drawing of Sonichu and Rosechu in front of the American flag in uppercase. (This image was reused from page 25 of Sonichu 9, during the sequence where Sonichu claims that people calling Chris gay are an insult to America. That's nice to know.)