"Sonichu's Ode to Rosechu" is Sonichu's poem to Rosechu. Briefly quoted in Episode 2, with the full text available in a Valentine's Day edition of Sonichu's News Dash. In one simple poem, Chris manages to make the reader completely lose all respect for literature in general. Obviously written stream-of-consciously, it's a mishmash of a loopy, offbeat meter and some extremely awkward rhymes. However, it still beats out many of Chris's poetic forays.

Incidentally, Sonichu feels he is required to point out that Rosechu can't run as fast as he. He's a real charmer, that guy. 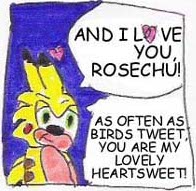 Oh, Rosechu, you are as beautiful as a rose,
though a Zapbud is the flower that heals your woes.

You shock me with your electrifying radiance,
If I evolve into your knight, I will protect you with my lance.

Speed makes no difference, though you are slower than I,
You dance in a field with such grace and style. Sigh…

I will run great distances for thee,
for I can run very fast and never get a strained knee.

Rosey, as often as birds tweet,
will you be my lovely heartsweet?

The poem starts out rather well, with the first couplet managing to make sense and (almost) follow a meter. Things immediately rocket downhill in the next two lines, the phrase "electrifying radiance" throwing off the rhythm and not really rhyming with "lance". This is, of course, ignoring the chauvinistic tone and the romance-killing Pokémon references. Chris comes under some heavy stress for the next bit, apparently, opening with a rather boring and cliched claim, followed by the awkwardly stuffed in 'strained knee'. The ending fares slightly better, reestablishing a pattern (albeit with a very awkward word order), but, by then, the damage is far too great.