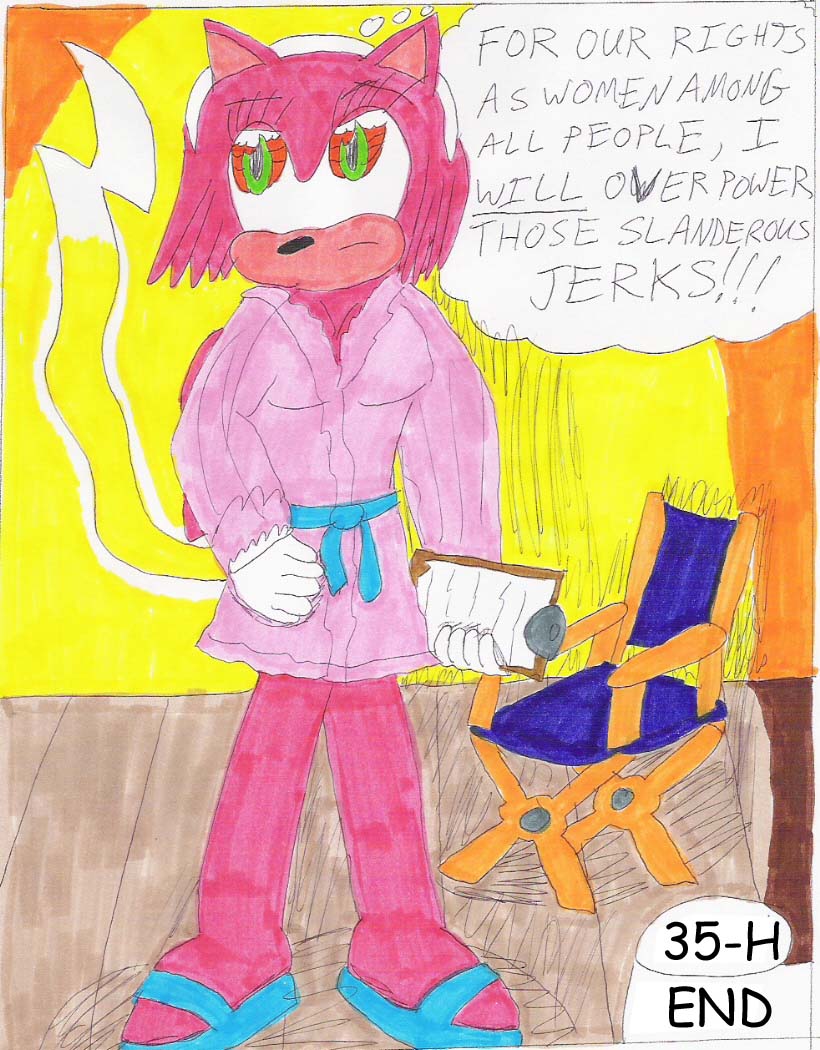 Sure, sweetie. Now make me a sandwich, would ya? 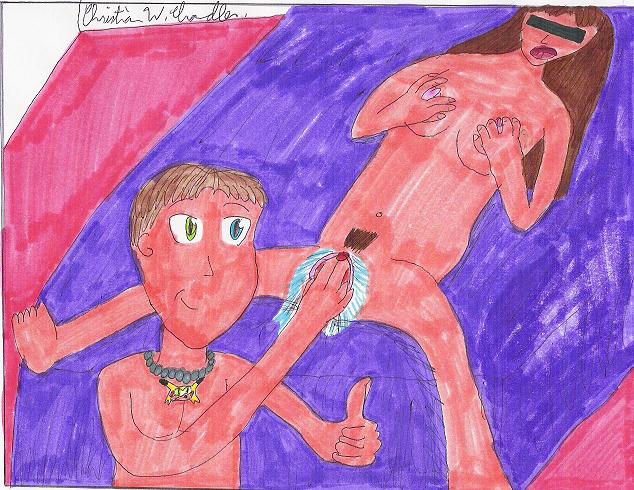 Chris giving the thumbs up (and two fingers) to women's rights.

One would think that a person who socialises almost exclusively with women and refers to all men aside from himself and his father as "jerks" would be very supportive of women's rights. In the case of Christian Weston Chandler, however, one would be mistaken. Women's rights, at least in Chris's mind, refer to the right of women to strip without interference, and the right of a woman not to be accused of having a pickle.

Given his admitted love of the 1964 classic Mary Poppins, he presumably took the concept from the character of Mrs. Banks, who is a suffragette in 1910 London.[2] Of course, Chris wouldn't have the first idea of what women's suffrage is, let alone the impact it had on world history, and why it was being shown in the movie in the first place.

Some of Chris's views suggest that he actually has a chauvinistic, if not outright misogynistic, idea of what a woman's role in a family must be. While Chris regularly talks up how great most women he's interacted with are (regardless of whether or not said praise is actually warranted), Chris's ideal woman is ultimately someone who will do all the work in caring for the family, while working a full-time job, and while mothering Chris while having sex with him whenever he wants. Oddly, his views haven't changed much in spite of the fact that he now identifies as a transgender woman – Chris sees himself as having an exemption from these same responsibilities in a hypothetical relationship, because he's "special".

As stated, Chris's extreme zeal for "women's rights" probably comes from Mrs. Banks, the mother of Jane and Michael in Mary Poppins, a 1964 Disney film based on the book series by P. L. Travers. As the story is set in 1910 London, women did not yet have the right to vote, but there was a mass uprising of campaigns for women's franchise around this time, particularly from groups like the radical Suffragettes and the more moderate Suffragists. Mrs. Banks is the mother of the children and sings the second song, "Sister Suffragette", during which she mentions prominent women's campaigner Emmeline Pankhurst being arrested (again).[3]

Mrs. Banks and her friends were depicted as struggling for the greater cause of being treated as an equal, with the same rights and opportunities as men. Chris, however, takes it to mean they simply want to remove their clothes and fuck whenever they want. 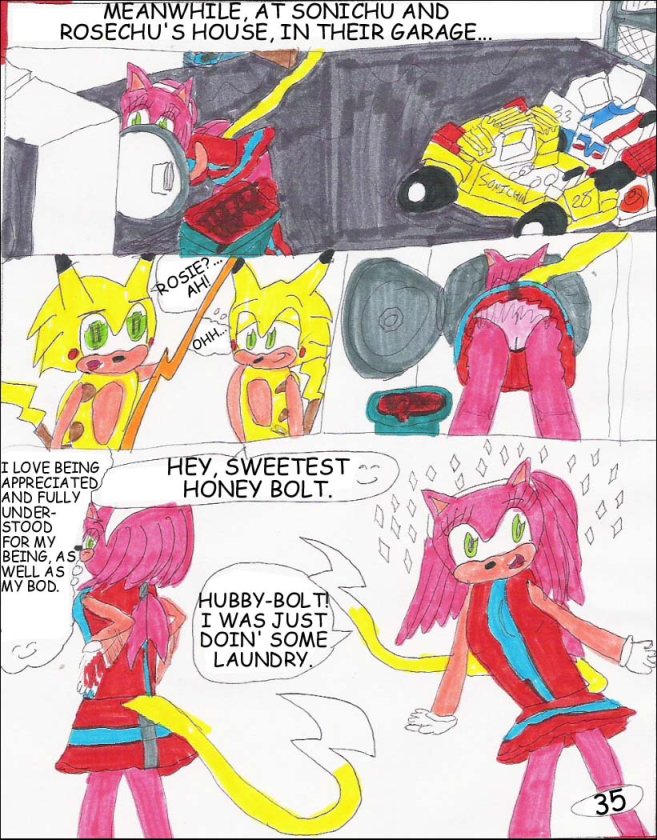 An example of Chris's disclaimers.

In the comics, women are portrayed as only enjoying lots of sex, shopping, and cooking (not for themselves; they cook for the men). Similarly, when they go shopping, they buy clothes specifically to wear for their significant other/crush. They have stereotypical female attributes which Chris clearly believes are legitimate, such as them eating salad at McDonalds and squishing over male characters, while being motivated only by the desire to find a mate and please him with offspring.

Chris's most prominent reference to women's rights occurs at the end of Episode 17, in which the Rosechus of CWCville strip naked to celebrate their victory over Jason Kendrick Howell (during which Rosechu rapes Howell (she's supposed to be the hero) and assert their dominance over 4-cent garbage.com. This scene also implies that women cannot vote in CWCville, because at one point, the Rosechus start singing the "votes for women" portion of the song "Step In Time". This brings up a sinister aspect of Chris's dictatorship over CWCville - he's passionate about batshit laws like making the consumption of tobacco punishable by imprisonment, yet the CWCville administration has never even considered voting rights for women (the United States have had equal voting rights for women since 1920). Considering how Chris tends to put women on a pedestal, you would think he would have addressed that already within Sonichu canon.

Despite their phenomenal talent for fighting evil, Chris depicts Rosechus as passive sexual objects for Sonichus. Reflecting Chris's own distorted image of women, the Rosechus in his comics tend to exhibit a desire to engage in stereotypical behavior, with occasional aggressive sexual overtures. Women also tend to act as deus ex machina plot devices - occasionally leaving their role as irrelevant supporting characters to engage in acts of great bravery and heroism. Often, the female characters offer nothing of any substantial narrative value. Rosechu is seen more often being rescued from damsel-in-distress situations then actually being a competent hero.

It is obvious that Chris is aware of the idea that objectifying women is frowned upon; every time he makes his female characters use their feminine qualities (to put it altogether too mildly), he is quick to add a disclaimer that he respects the women for both their minds and bodies, and/or make the claim that the characters are doing it because they want to fight for the rights of women. However, due to his mental block, he fails to understand that disclaimers like these make him appear to be a hypocrite. 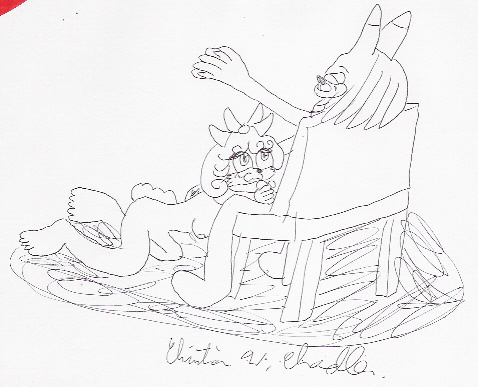 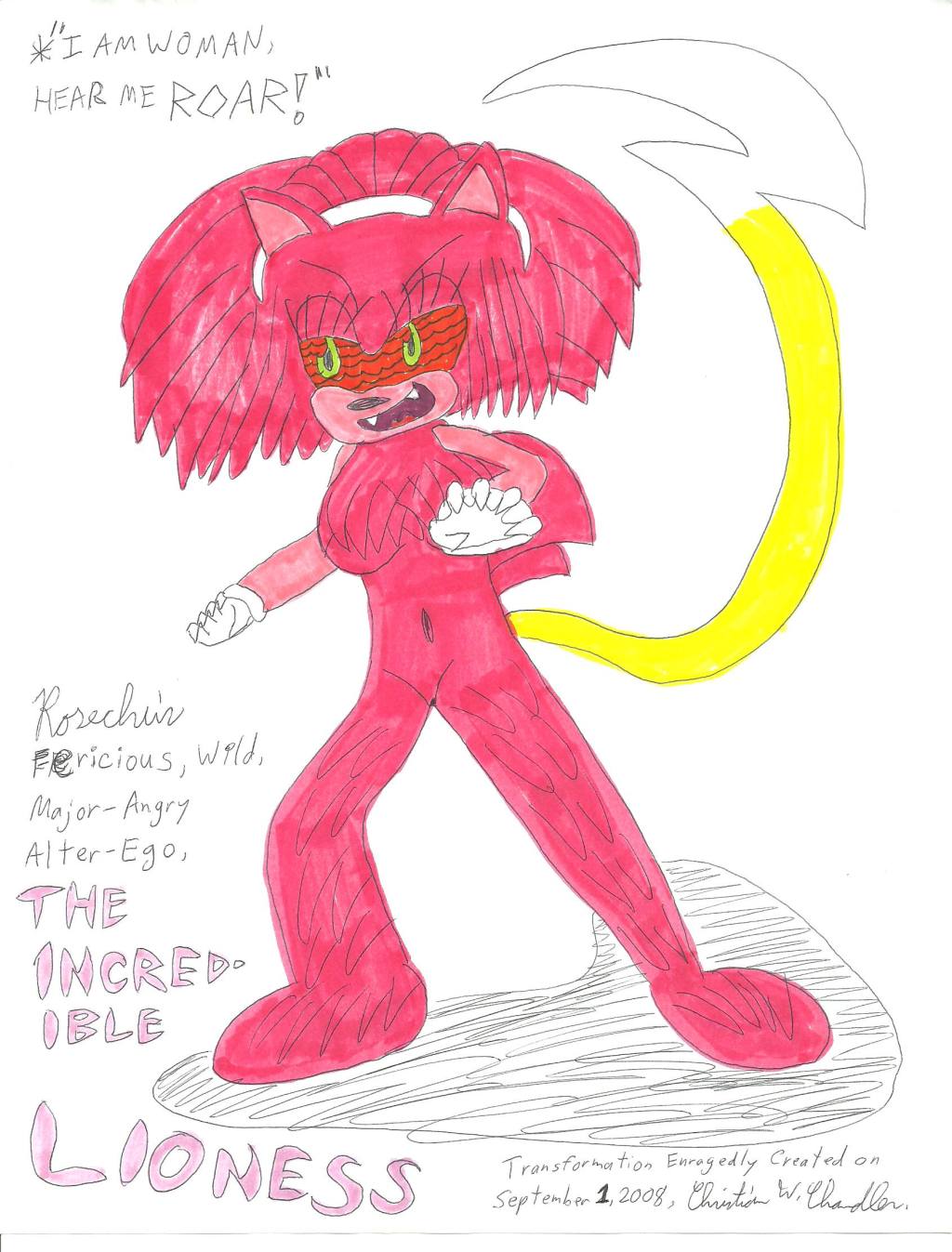 The very essence of femininity, according to Chris. How else are we supposed to interpret this?

Chris allows himself to be controlled by his own desires, and has soaked in all sorts of knowledge about women primarily from anime, video games, and in particular pornography, which Chris considers "educational".[5] He has had several problems realizing the difference between exaggerated stereotypes and the reality, as also evidenced by his racist remarks. During the Tomgirl Saga, he states that he uses the female bathroom, and that there is "no going back for him", not realizing that he is blatantly intruding upon the privacy of the women present, and disregarding their feelings (which, undoubtedly, can be summed up as pure terror).

This delusion regarding females is painfully obvious in Chris's interaction with women during his Love Quest. Chris takes on a completely passive role in his attraction strategy, waiting to be approached by women whom he thinks will take interest in his appearance, and who when in a relationship with him will look after him both financially and physically - essentially, a maternal figure. Rather than aiming to better himself, Chris is looking to be fulfilled and served by women. Rather than having the full potential to use their talents in society, women's rights are the rights of women to bring pleasure to men as Chris sees fit. When Chris claimed to have lost his virginity to a hooker in April 2012, he also said, quite bluntly, "My future sweetheart will find out about it", giving off the impression that whoever hooks up with him will just accept him sleeping with a prostitute right off the bat, and relegating the woman who finally took away his hated virginity to being nothing more than an organic Fapcup. This was proven true when in December 2014, he wrote this as a vow on a card to his latest sweetheart, Catherine.

When confronted with his sexism, Chris becomes extremely indignant and offended.[7] When his sexism is pointed out, he gets upset and clarifies that he would never harm a woman (though he has no problem threatening to kill them). Chris seems to be under the impression that "sexism" basically means "physical abuse", and doesn't think portraying women as sexual objects obsessed with shopping is offensive or damaging.

It seems that in recent years, Chris has gotten even more demanding and aggressive in his attitude towards women. Read this E-mail to Catherine leaked in 2014, where Chris gets annoyed when Catherine says no to a relationship (big surprise), where he basically insults the woman and blatantly claims that he's entitled to her, right before whining about how depressed he is. He even goes on further to say that she should "appreciate the the hard work and effort I had put into US!!!", even though shortly before that he was abusing her friends and telling her what she can and can't do.