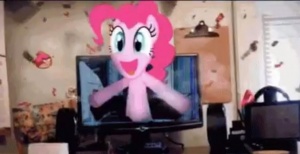 Pinkie Pie jumping out of a broken TV screen. Among the many things on the wall, there is an empty clipboard, and a sticker of Red from Angry Birds.

The Iron Curtain was a political boundary dividing the western and eastern countries of Europe during the cold war; to Chris however an Iron curtain is apparently the proper name for the barriers that separate dimensions from one another (including our own) sort of like the central finite curve in Rick and Morty (only slightly more retarded). Given that the Idea Guys had a strange fixation with the Soviet Union, the naming of this delusional phenomenon is almost certainly their doing. Chris has also referred to such barriers as the fourth wall.

According to Chris, cartoons can actually interact with people from other dimensions. This is what he refers to as "breaking the fourth wall". This is based on a trope of the same name, where characters of a media get to "interact" with the audience, sometimes commenting on their current scenarios or stating what the audience might be thinking during said scenario.

According to Chris, only beings that are just as powerful as him are able to interact with the residents of dimensions outside our own (which he refers to as OCs). He has determined that the primary cause of this is from a mysterious force he refers to as the fourth wall. He describes it as being an impenetrable barrier that only OCs are able to pass through for a short period of time and directly communicate with the viewer. He believes that a few of these OCs are also watching everything that the people on the Earth dimension are doing, chronicling it, and even channeling them. In Chris' case, he believes that the OC CWC Psychlight, whom was meant to be a CPU Goddess representation of the CWCki (or the CWCipedia), is his meta-physical chronicler. Chris has also stated that ever since the Dimensional Merge, the people that have survived are returning the favor of being stalked by cartoon characters by becoming one with the cartoons themselves.

Practicing to Break the Wall

Chris explaining why he damaged the wall.[1] 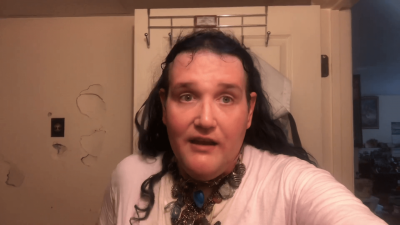 The punched-in wall seen in Direct Message to Hasbro: MLPG5 Is Cancelled.

On 27 July 2021, Chris posted a video, where he once again protested against Generation 5 of My Little Pony. The same video showed what appeared to be a wall with multiple dents and holes behind him.

At first, it was assumed that Chris had punched into the wall out of anger prior to recording the video, however, when The WCT asked him what happened, Chris claimed that the wall was damaged because he was supposedly preparing for the day he would finally break the iron curtain between Dimension 1218, and another unspecified cartoon dimension.[1] The dents and holes have apparently been there for some amount of time prior to the video, and he has seemingly been occasionally punching the wall in order to practice for such an event.