Dick Licker; that is I 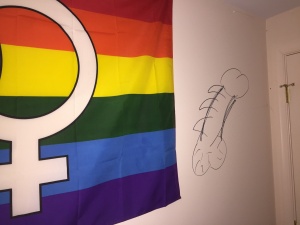 Dick Licker; that is I. is a video uploaded by Chris to YouTube on 15 April 2018, showing him slobbering on Magi-Chan's penis[1], drawn on his wall.

Chris shows an illustration of Magi-chan´s penis drawn on his wall. Complete with spines and ball hair, reguardless of the fact that Sonichu´s usually have fur all over their body. Chris then, to no one´s suprise, proceeds to lick the hedgecock.

[We see Chris licking his wall, which has two ducks drawn on it. As Chris licks the drawings, ink runs from them down the wall. Near the end, he looks at the camera with his tongue hanging out and then wipes his mouth with what appears to be his shirt.]

The Idea Guys had brainwashed Chris into believing himself to be bisexual and married to Magi-Chan. During The Bad Beginning chat, Chris acted out his new bisexual identity and decided to deface the wall with the penis. At the suggestion of an Idea Guy, he then showed it to his mother; to which she began crying and quickly ran back upstairs.