Anti Troll Movement Video1 is a video Chris uploaded on 26 September 2010. He "sings" the same song about trolls featured in his heavily plagiarized Flipnote animation Don'tGetTrolled!, apparently in hopes of promoting an "Anti-Troll Cyber Bully Movement". Surprisingly, Chris was able to recite the lyrics with a good deal of accuracy, even though he completely missed the original point of the song – the point of which is advice that Chris could particularly use.

After he sings the song, Chris pads out the video for a minute to, completely contrary to the alleged topic of the video and having nothing to do with anti-trolling, lists the "sponsors" of his video, including ModNation Racers, and a bar of Olay soap. Considering he is wearing the same T-shirt he wore the day before, his promotion of personal hygiene products is rather ironic.

[Chris turns on the camera and steps a pace back.]

[Another step back with a head twitch, and begins singing "You've Been Trolled" to the tune of "Be Our Guest" from Disney's Beauty and the Beast] 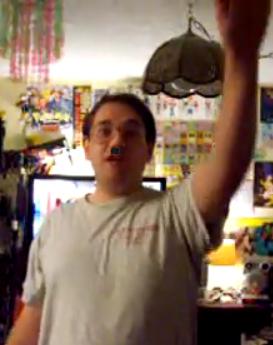 [He turns away and reaches for a crudely-drawn picture of a troll, which he holds up through the song and after.]

...to this guy
He is just getting a rise
Out of you
Yes, it's true
You respond and that's his cue
You start trouble on the double
While he strokes his manly stubble

This video, portraying and projecting the Anti-Troll Cyber Bully Movement...

[He puts down the troll picture.]

...has been brought to you by ModNation Racers and...

...Oil of Olay brand bar soap, and other things. Softer, smoother skin in a week or so! And, not only that, it gets you clean, and it makes you smell good...

[Chris throws up a Nazi salute and turns off the camera.]