Clyde is Weaker than Water 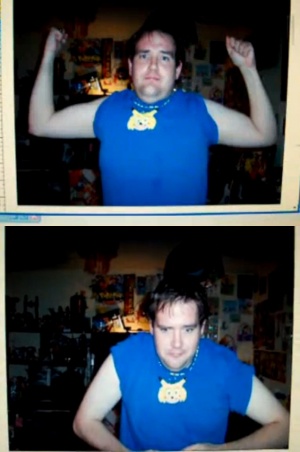 Check out these guns!

Clyde is Weaker than Water is the third video threatening Clyde Cash, uploaded by Chris on 30 October 2009. The proper use of still in the current video helps the intimidation factor since we don't see Chris straining with effort on this one.

Chris also shows that he can lift a chair (the same feat of strength and the same chair appeared in an old video) and reveals that he is "repulsed" by "shirtless dudes" with "ugly pecs", advising them to wear a "muscle bra" (whether this is because Chris is a self-hating male or overly muscled guys remind him of his latent homosexual urges remains to be seen).

Note how his right arm appears slightly larger than his left, go figure. Also of note in this video, we see that Chris's hairline has receded even more noticeably than before. At his current rate of follicle failure, his My Little Pony action figures may soon have to depend on manes of the pubic variety. Another thing Chris fails at is coming up with a slanderous title: in martial arts, one of the most common advices is to "be like water", soft like a calm stream, but also strong like a thundering waterfall, and Chris is implying that Clyde is, essentially, as skilled at fighting as a martial artist. Not to mention, water is technically "strong" if you consider all the crap it "holds up." Could be a reference to GK Chesteron (the modern world is like niagara... weak as water") but this is unlikely.

Huh! Look at Mr. Clyde Cash now! Heh! His muscles are so weak, they fall right down. Look at that, he's so weak and feeble. Heh, look at him. And you know what, I highly recommend this to every dude who goes around shirtless: wear a muscle bra. Because nobody, and I mean nobody wants to see your dog-gone ugly pecs, they're so ugly and repulsive, ugh... creeps everybody out.

But anyway, you wanna see real muscles, check these out. [The image changes to several photos of Chris flexing, the final one of him holding an office chair above his head with a strained look on his face. Afterwards, the image cycles back to the "image" of Clyde. Chris does a very poor a capella rendition of "The Final Countdown" throughout.]

But anyway, enough said about me. This guy is really weak. Stay tuned for another piece.