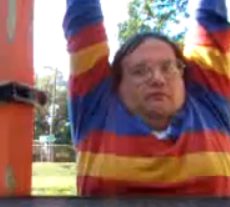 Chris (Farley) struggles even to hold on to the bar.

100 2278 is a video Chris created on 12 October 2010, at the behest of his sweetheart Jackie.[1][2][3] It leaked to the public the next month, on 6 November 2010. Chris attempts to do pull-ups, but shortly after beginning, gives up and admits defeat due to his weight. This event marks a historic day in Christory as it is the first time we have witnessed him acknowledge that he is not, in fact, superhuman.

[Chris hangs from the bar, not far off the ground, for about five seconds. Quickly, the exertion causes him to lose his grip and drop to the ground.]