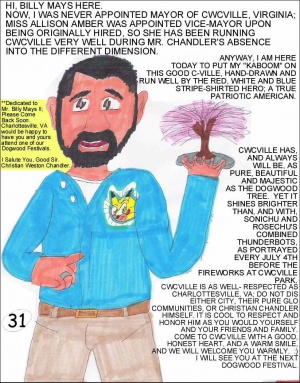 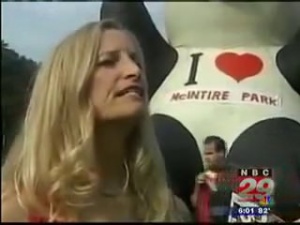 "I think what we're saying is... it's going to be compromised," – said Mala Cunningham at just that same moment. Little did she know... 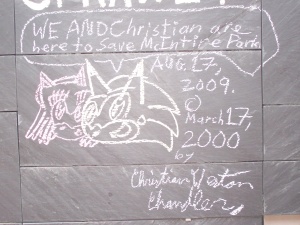 ...that was exactly what was happening.

McIntire Park is a park in Charlottesville which became a favorite hangout of Christian Weston Chandler during 2009. It features a chalkboard wall where visitors can leave whatever messages (or drawings of your favorite hedgehog hero!) as they see fit. Every April, the annual Dogwood Festival is held at the Park, featuring a fireworks display.

The Park was at the center of a local controversy, due to plans to reallocate part of the area to a new YMCA facility and a parkway. Chris joined the effort to save the Park in the summer of 2009.

On 22 July 2009, local NBC affiliate WVIR ran a story on the six o'clock news about the controversy surrounding the park. During an interview with a representative of the McIntire Preservation Committee, Chris marches through the background of the shot while holding up his Sonichu medallion.

Chris in a Council Meeting

At some point prior to 14 August 2009, Chris created a two-foot-wide sign featuring Sonichu, Rosechu, and their children with giant wads of babbling text, intended to express support for the park. The youngsters are holding extremely tiny signs that read "SAVE MCINTIRE PARK," which would be impossible to read from more than six feet away, rendering the sign largely useless.

The sign would be seen in a video where Chris used his artwork to refute the claims of CChanSonichuCWC. On 17 August Chris brought the sign with him to a Charlottesville city council meeting, and was recognized for his effort. Chris began to ramble out of turn until the city council told him to pipe down, earning the envy of millions.

Alas, even the power of Electric Hedgehog Pokemon wasn't enough to save the park; court challenges to the YMCA[1] and parkway[2] construction failed, and the construction on Chris's precious park began in 2013.[3] 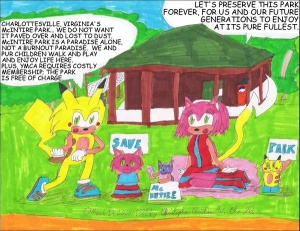 Sonichu and family expressing their support for the park

Fenwick: I would also like to call special attention to a young man, Christian Chandler, who's in the audience, who spent a great deal of time making his own save McIntire sign.

Chris: [holding up the sign] Indeed! Hmm. It's less expensive for McIntire Park. Membership is required for the YMCA and plus the wading pool should be bigger and deeper.

Chairman: [cuts Chris off] Eh, heheh, one speaker at a time. Thank you. 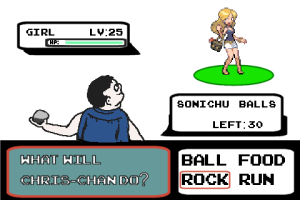 Artist's conception of Chris using the attraction rock of fail. 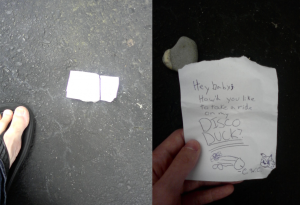 What the note probably said. 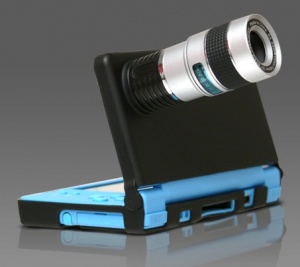 The "zoom lens" as aforementioned. Apparently it acts as a sort of optic enhancement by adding an optical zoom

On 4 July 2010, a troll reported that they had spotted Chris at the Independence Day celebrations held at McIntire Park on 4 July. Chris allegedly wore relatively normal clothing, indicating that perhaps he had realized how retarded he looked on his previous outing.

The troll reported that Chris had what appeared to be a large camera lens attached to the front of his DSi, and was presumably using it to survey the area for boyfriend-free girls.

Interestingly, the troll also reported that Chris scribbled a note onto something, wrapped it around a rock, and chucked it at a woman in what would appear to be a more aggressive and direct twist to the Red String of Fate tactic. Another possible explanation is that this is Chris's way of messaging people he doesn't know on Facebook or various dating profiles, applied to the real world. Whatever his logic was, the contents of the note remain a mystery.

For Truth and Honesty, see the archived CWCipedia page on McIntire Park