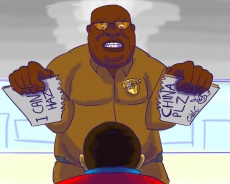 What typically happens when Chris visits his attraction locations.

In practice, the Attraction Locations that Chris chose left him exposed to discovery by various authority figures, who take umbrage with his methods. He steadfastly refused to abandon his post until he was either banned or forcibly removed from the premises. Undaunted, he would go on to find new Attraction Locations, only to be banned from them as well.

It's interesting to note that the use of these different locations marks some of the few significant milestones in Chris's life between 2003 and 2008, and even this minor change in his routine was forced upon him. It's entirely possible that if Chris had made less of a ruckus, he might still be sitting in his original Attraction Location to this day, indifferent to the years wasted in his fruitless endeavor.

Chris's time spent at his attraction location would be called his "attraction time".[6] While waiting for a boyfriend-free girl to approach him, he would do things such as play on his DS, watch videos on his DS, pace back and forth, sing loudly, and so forth. These activities which, obviously, were rather distracting to mall patrons (and not terribly attractive to nubile passersby), would factor into his being banned from such locations.

Due to his imbalanced biological clock (typically causing him to crash into slumber at about 6:30 A.M. and wake close to noon) attraction time would generally take place in the mid-to-late afternoon. This time would conveniently (and to the horror of the female patrons of Fashion Square) provide a higher concentration of potential sweethearts for Chris to harass.

Anna McLerran's "The Tale of the Crazy Pacer" is the definitive chronicle of Chris spending his attraction time, when he moved from sitting in front of Abercrombie & Fitch to PacSun, where Anna was working at the time.