This article discusses the creator of the comic Chris Chan: A Prequel Comic, as well as the comic's relationship with Chris. For information about the comic itself, please see Bryanfrogboy/Comic.

Bryan Shickley, more commonly known as Bryanfrogboy is an animator, graphic designer and the creator of Chris Chan: A Prequel Comic. Bryan's creation of the Prequel Comic appeared to have caught Chris's attention on 2 January 2018,[2] and he began following the production of that comic as well as some of his other works up until May of 2018.

Chris first discovered Bryan's Twitter account on 2 January 2018, when he saw the completed second page of the comic. At that time, Chris, along with a couple of bystanders, was curious about what this comic would become. Bryan explained that the comic was meant to be less a parody of Sonichu or Chris's life, but instead a retelling of Chris's life as told from what he believed to be Chris's point of view.[3]

Chris would at one point, around the time the Idea Guys brainwashed him into believing he was Bisexual, begin showing feelings toward Bryan, describing him as a "sexy Shrek-like vampire", flirting with him on a few occassions, and even writing an erotica poem involving him.

Bryan's comics would get Chris to reflect on many of his past mistakes, espescially those that had hurt other people in his life in some way.

During the Financhu Crisis, which was worsened by the Idea Guys extorting sums of money from him, Chris would take advantage of the creation of the prequel comic, seeing it as an opportunity to gain more money. He would promote it on various platforms, including Twitter and YouTube.

Bryan made some merchandise for his comics, some of which used Chris's art, which included pillows, notebooks, and clocks. Chris would collaborate with Bryan to sell the merchandise by promoting it in some of his Twitter posts.[4] 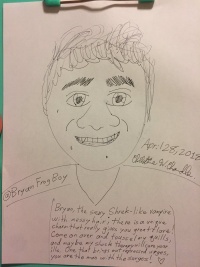 On 28 April 2018, Chris participated in a contest held by Bryan, #MakeBryCry, in which the person who drew him in the meanest way would win $50. Chris's entry was a portrait sketch of Bryan, which included a love poem from what seems to be Chris-chan Sonichu's perspective:[5]

On 30 April, Chris went further, saying, "I could kiss your good-looking face anytime" in a tweet to Bryan.[6] This took place during a time when the Idea Guys had brainwashed Chris into thinking of himself as bisexual.

On one occassion, Chris had gotten in an arguement with Bryan over the existence of OCs and Reality Cartoons.

On May 4, Bryan stopped following him via Twitter after Chris was trying to find an excuse on why he hasn't worked in anything Sonichu-related in the last couple of months and at the same time he mentioned Bryan, in which he replied by saying, Please don't drag me into this. I've drawn your OCs more than you at this point and I don't make a percent of a percent of what you make for doing nothing. As of February 2019, Bryan is following Chris' current Twitter handle.

People have noticed that he has been tweeting in a conversation between him and Chris that in a way seems like he's mocking Chris, for example, him saying that Chris is a beautiful soul that would never lie, someone else posting a fake picture of an Amazon ad of his comics and saying that his comic is selling well and making lots of money with Bryan jokingly going along with it, and more recently he made a template of Sonichu's face for people to print out and make their own medallion, and he claimed that Chris approved of this, only for Chris to tweet that he did not approve. Bryan later made a video defending Chris, showing these troll allegations were false.[7]

On the eve of Chris' 37th birthday, Bryan uploaded an animated feature based on his Prequel Comic, which he gifted to Chris via Twitter.[8] Chris responded with plenty of gratitude:[9]

The Art of Criticizing Chris Chan 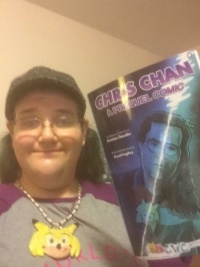 As soon as Chris Chan: The Prequel went up on YouTube, the comments were completely infested with weens. Bryan was already well-aware of the children attacking Chris, but with the massive new surge of interest in Chris, the weening got really bad. He decided to make a video defending Chris. He argues that trolls have a major part in Chris' delusions, and people who troll him are just as bad as Chris himself. He also gives his opinions on Kiwi Farms, some of it negative and some of it positive. The next day he deleted the videos in their entirety due to claims of hypocrisy and white knighting.

The video is preserved on the Wayback Machine.