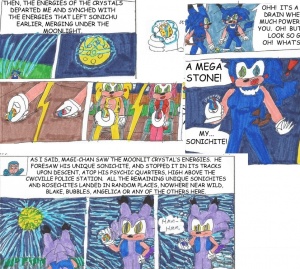 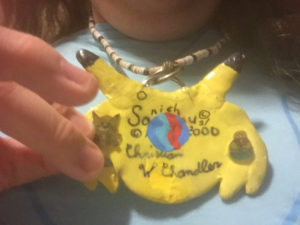 Chris's Sonichite, attached to his medallion.

A Sonichite is a special item introduced in Sonichu #11. It is ripped off from Pokémon's "Mega Stone" items.

In Pokémon, a Mega Stone is an item which enables a Pokémon to temporarily evolve to an upgraded form. The Stone is set in an accessory which the Pokémon wears, which disappears during the evolution, but reappears afterwards. The name convention for each stone is the Pokémon's name, followed by the suffix "-ite." [1] 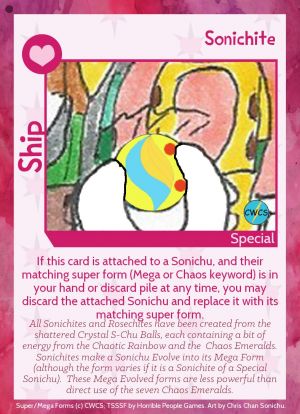 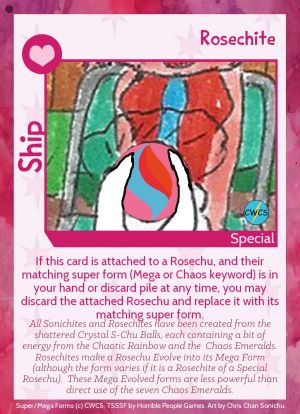 The energy of the Sonichu Balls (Chaotic Crystals) depart from the (now female) Chris-Chan Sonichu and sync with Sonichu's energies under the moonlight. They then shatter into millions of fragments, the Sonichites. These are Mega Stones which allow Electric Hedgehog Pokémon to Mega Evolve. Comic Chris's stone is called the ChrisChanSonichite. Sonichu and Rosechu pick up Sonichites at their houses, Mega Evolving into Ultra Sonichu and The Incredible Lioness respectively.

The effects only last for a short time and the Sonichites need time to recharge between uses. The Sonichus store their Sonichites in their socks, while the Rosechus use barrettes (hair clips) to keep them in their fur. Apparently, they will be used as a last resort.[2]