Jiggliami is Blanca Weiss's "original" character that Chris claimed after she broke up with him. Note the irony and hypocrisy in this action, considering he can steal other people's characters willingly, but when it comes to his characters being stolen, he becomes upset. Also in Episode 18, it is hinted that she was Sonichu's girlfriend while he was still a regular Pikachu. Fortunately, we are spared any flashbacks of the conception of an Igglybuff.

Her first appearance in the comics was the KCWC segment in Sonichu #7 where she was interviewed by DJ Jamsta and Lolisa Rosechu followed by boring, sexist talk and a lame, equally sexist joke about Jiggliami's snowballs. Her next (and last) appearance was Episode 18, during the "Spring Break" escapades. She is first seen with Blanca, who is presumably her manager or plays guitar for her… or something, the two have an inane conversation about energizing the crowd and how after the concert, they'll be famous enough that they could get any man they wanted to. The conversation ends with Blanca alluding to her heart's desire being trapped in another dimension.

Later on she finds the comatose Blake after his encounter with Silvana, and then Magi-Chan and Jiggliami inform Bubbles that Silvana is posing as Blake. Later on, Jiggliami sings her song "War of Love" to the cheers of the audience, but before the song she states that she's missing her old Pikachu boyfriend.

Ever since Chris's breakup with Blanca, Jiggliami has inexplicably vanished, never to appear in the comic again.

In the Blanca E-mails she is given some bullshit history about wishing on a star and somehow getting turned into the anthropomorphic abomination seen in the comic, but Chris never mentions this. Within the comic Jiggliami just shows up with no explanation as to how and why a humanoid Jigglypuff exists. 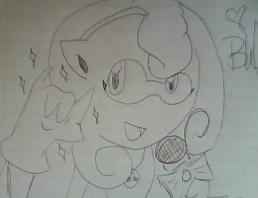 Blanca's drawing, in and of itself a crude copy of the character on the right 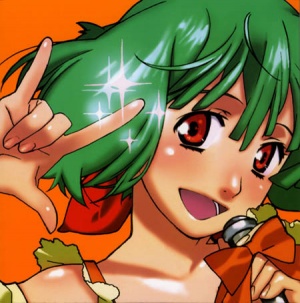 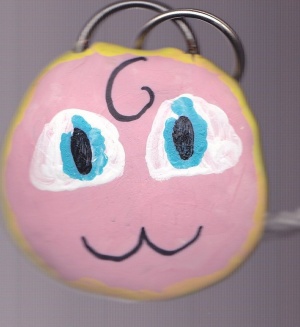 The Jiggliami medallion Chris made for Blanca.

If Jiggliami seems like a stereotypical Japanese "idol singer", there's a good reason for that. The original illustration by Blanca has a striking resemblance to both a screencap and illustration of Ranka Lee, a character from the anime Macross Frontier, which means Christian further degraded the quality of the original, Xerox-style. The characters are both pop stars, and share many other attributes such as their "up-and-coming" status and inane, bubbly songs. To be fair to our autistic hero, mecha anime is probably not kawaii enough for his tastes, so he probably never has even heard of the series; so how would he know he was tracing a trace? Still, damn.

There's a small bit of irony, though, in that Macross Frontier's main character is a former kabuki actor who played female roles, much like men playing women in old-school Shakespeare productions. To make matters even funnier, the anime also had a comic relief flamboyantly gay character. Maybe it's for the best that Chris doesn't know about this. 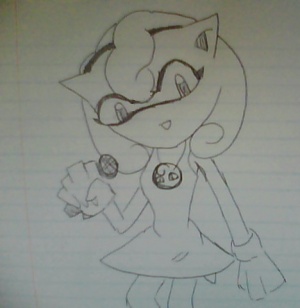 The lyrics to the song Jiggliami was singing were also ripped off (and mercilessly butchered) from a music video by Supercell using the Japanese Vocaloid character Hatsune Miku.

If this whole situation sounds familiar, well, it is: Simonla originally was a creation of a another "fan" that was in turn a, ahem, "parody" of another animu character, exactly like Jiggliami.

Jiggliami is a knockoff of the following: