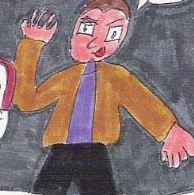 Giovanni was the ruthless leader of Team Rocket, appearing in various Pokémon games for the Nintendo Game Boy and DS machines. Being the very first Pokémon villain, he was also prominently featured in the anime and manga adaptations. Chris, naturally, saw fit to swipe the character and use him as a half-baked Sonichu villain as well.

Giovanni first shows up in Sonichu during Sonichu #1. In this narrative, he is the adoptive father of Naitsirhc, Chris's main rival, and he remains the leader of Team Rocket and the Viridian City Gym as well. Though in the games Giovanni was defeated by the player and he abandoned both the Rockets and his gym, Sonichu ignores the events of the games, establishing that Giovanni still leads Team Rocket and still maintains a "Gym/Base" in Viridian, as seen on Chris's map of CWCville and it's surrounding areas.

In his first appearance, Giovanni, Naitsirhc, Doctor Robotnik and Bill the Scientist all work together to create Black Sonichu, who they then send off to kidnap Rosechu as part of their plan to lure Sonichu into a trap and capture him. However, both Sonichu and Sonic go to rescue Rosechu, leading to a fight with a robotic Sonichu duplicate called Metal Sonichu, also made by Team Rocket. Note that Giovanni in the games is supposed to be a very powerful Ground-type Pokémon trainer, and in the games, Electric types like Sonichu are completely useless against Ground types. And yet Giovanni still went out of his way to clone another Electric type to fight Sonichu with.

Later, Giovanni appears in Sonichu #3 giving orders to Blake just before he begins his mission to steal the Legendary Master Sunstone. After the end of the comic Giovanni disappears from the series until Sonichu #7 in which he is part of the meeting of villains, though Blake does mention him in Sonichu #6, stating that Naitsirhc had been disrespectful to his father since his transformation into Reldnahc Notsew Naitsirhc.[1]

Giovanni reappears for the final time in Sonichu #9 as a player in the war on CWCville. During the battle, he uses a Jerkop Punislav to capture Rosechu in an attempt to blackmail Sonichu into instating Naitsirhc as the new Mayor of CWCville, though his cunning scheme is foiled when he is knocked out by a basketball thrown by Bionic the Hedgehog. Soon after, Naitisirhc teleports him away to safety, and he is never seen again.

Since Chris never explained what happened to Giovanni afterwards, it can be assumed that he either turned into a good guy when Collosal Chan un-brainwashed all the members of PVCC (assuming he ever was brainwashed at all; Giovanni was a douche way before Mary Lee Walsh showed up), or else Giovanni just quit his job when PVCC fell and ran off to Mexico or something. Either that or Bionic accidentally killed him.