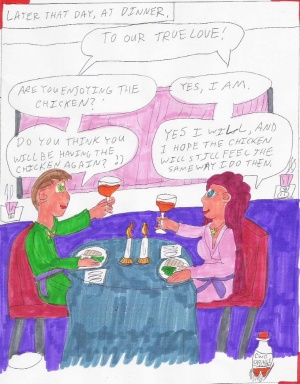 Chris and Ivy drinking CWC Orange after their sex. Little does Ivy know her drink is spiked.

CWC Cola (or CWC-Cola) is Chris's official soft drink brand, currently holding a state-enforced monopoly of the CWCville soft-drink market. It is the state-mandated beverage of CWCville, and is the only legal carbonated beverage in the nation. Its name is a pun of Coca-Cola.

According to Jamsta Sonichu in Sonichu #8, the CWC Cola Company was founded in 1985 by Robert Franklin Chandler Jr, three years after he founded CWCville.

The formula for CWC Cola is similar to the formula used in Pepsi-Cola.[1][2] It is likely that the only difference between these two prime beverages is that where Pepsi-Cola is a cola, this drink is probably an orange flavored drink.

Variations and other products