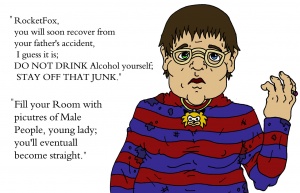 The first IRC fan chat with Chris, from 16 October 2008. The chat covers a large variety of topics, giving trolls insight into Chris's life for the first time.

The most notable part of this chat is probably Chris's somewhat heartless thoughts on how Rocketfox should cope with the loss of his father. Chris also takes a few moments to discuss the 2008 US presidential election, basically revealing he has no idea what the issues are, and that talking about politics is just another source of stress. Chris also gives some monumentally stupid advice to Vivian Gee, who is apparently struggling with her sexual identity.