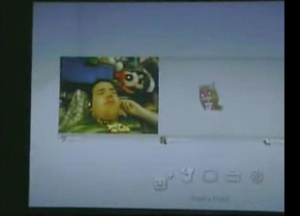 "Let's not talk about pickles."

An Interview with the Chris-Chan was conducted through the PSN and released to YouTube on 17 October 2008.[1] It is the first interview Chris granted since his rise to internet fame.

Notable is Chris's genuine concern that then-candidate Barack Obama, if elected, would paint the White House black, in addition to denying that the medallion was destroyed.

We also catch a fleeting glimpse of Snorlax in her first ever video appearance. She would not appear on camera again until the leaked release of You're Always Pretty more than 3 years later.

For a while, this video had become lost media, due to it being removed for "violating YouTube's policy on hate speech" and no known archives of it existing until it was re-uploaded on 26 January 2017.

Interviewer 1: So, um, what do you think of Barack. Just tell me, please.

Chris: I just don’t care much for him.

Interviewer 1: Why, you know, why? Be specific, man. You’re smart.

Chris: Well…there’s a theory that, uh, if Obama went to the White House he would probably paint it black.

[DMX's "X Gon' Give It to Ya" plays as a video depicts Obama in front of a black White House, flying a KFC flag with large buckets of KFC over the front lawn.]

Interviewer 1: But, why do you think he’s going to pain the White House black. Just, why? I mean it’s like me painting my house green for no damn reason.

Chris: [sigh] Can we not talk about pickles, please?

Interviewer 2: Are you aware that people on YouTube are, uh, claiming that they stole your medallion?

Interviewer 2: They said something about you made another one and it’s two times bigger like… like, uhh… It's false, isn't it? Because it’s on you, right?

Interviewer 2: Mostly false? I mean, what's… what’s not false about it, then?

Chris: I’d rather not talk about it and don’t worry about it. I mean…I mean they’re just blowing off smoke and uhh…they’re jealous of, ya know, some of my success and what not so it’s just best to ignore them. Don’t worry about them.

Interviewer 2: Damn, Chris. Sonichu and, uh, the Jiggliami medallion, I’m just glad they’re all safe, ya know. They… they go me going there when they showed me those medallions. I mean they look exactly like the one you had. Like, I was fooled. Like, this is why I asked you because they were picture-perfect.

Interviewer 2: So how did, how did that get into his possession, like uhh… you sent it to Blanca and how did they get it, how did it get to their possession in the first place?

Chris: They were, they were living nearby her and they just intercepted the mail.

Interviewer 2: What’s up with the pickles, dude?

Interviewer 2: Who is the man in the pickle suit?

[Significant laughter in the background.]

Chris: I don’t know who that guy is and I don’t think I really would care to know.

Interviewer 2: I mean, there’s actually someone in a pickle suit that you know and you hate him. [Background laughter]

Chris: Yeah, I don’t know who that person is.

Interviewer 2: I’m sorry. I just wanted to ask you, like, what do you, like, do you hate gay people?

Chris: Hang on a moment.

[ Barbara presumably walks into Chris’s room. Chris sets his camera down on his bed]]

Chris: Hi mom. I’m alright, how are you?

Chris: I’m talk…I talking to a couple of people on the internet on the PlayStation Network.

Barb: Okay. I'll visit- excuse you. Turn that AC up.

Chris: …Well…I’ll consider it. I’ll talk to you later. (picks up his camera) Alright, well, that was my mom. She entered and left.

Interviewer 2: Yeah, we saw that, Chris.

Interviewer 2: Ya know, you’ve got to be a respectable person.

["WTF BOOM" soundclip and footage of a mushroom cloud exploding.]