Catherine Sorrentino was, according to Chris in mid-2014, his latest sweetheart. Little is known about her personally, only that she wasn't real and admires trolls lonely, crazy men. She had an English accent and heritage, and as such used British spelling, which seems to have permanently impacted Chris's spelling. She was almost certainly white and younger than Chris, as his preferences preclude anything else. Although everyone knew her as Catie, Chris insisted on calling her Catherine. The two met on OKCupid in July 2014, when Christian discovered that she was a 97% match (which guarantees she's destined to bear his child), and pursued her. He kept her identity a secret until after their first date in late August. After several adventures, Catherine informed Chris in December that she was not interested in a relationship with him, sending him into another downward spiral of anger, loneliness and depression. 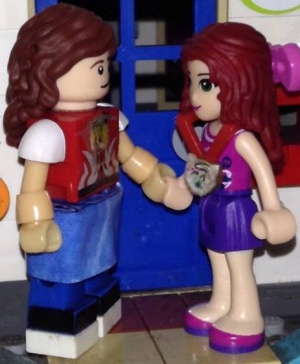 A Lego depiction of Catie and her captor, from 17 August 2014. Notice Chris's skirt and heels, and the Rosechu medallion around Catie's neck.

In early July 2014, fans discovered that Chris had created an updated OKCupid profile. Later that summer, Chris announced that he had found himself a new sweetheart. The first public indication was on 29 August, when a member of Kiwi Farms revealed that she had received an autographed photo of Chris which included a note, signed 18 August 2014, in which Chris said that he had a "girlfriend."[1] On 31 August, Chris claimed on Facebook to have gone on a date with his girlfriend while wearing a Britney Spears perfume.[2] On the same day he also changed his Facebook relationship status from "single" to "in a relationship," and according to the status change, the relationship had begun on 9 July.[3] In the next few weeks he made a few more Facebook references to his unnamed sweetheart. On 5 September, Chris told his eBay customers that the commissions they had ordered would be delayed because he was busy with his girlfriend.[4]

Chris's fans were entertained by this new development, but there was great controversy over whether or not Catherine was a bona fide sweetheart. The responsible trolls did a good job of keeping a tight lid on things through the fall. On 11 September, Chris responded to his fanbase's skepticism with this status:

It would not be until December that the inner circle would spill the beans and finally reveal that Catherine had been a troll, initiating the leaking of documents.

Catherine went on two real-life outings with Chris, the first of which, on 31 August, was considered a date by both parties. The account sheds light on how Chris's behavior towards women continues to be less than exemplary. Catherine's horrifying tale is below: [6]

Catie's elective suffering didn't stop there. She treated herself to another outing with Chris, which she insisted was platonic. It didn't end well, with Chris refusing to be just friends. She has provided some description:[7]

"Cousin Al," who joined the couple to both outings, has also provided a two-part report, written the day after the meetup:[8]

Even before their first date, Chris was so delusional about their future together that he sent three Apology Letters to Charlottesville locations in a bid to lift bans against him, specifically so that he and Catherine could go out together in public. He thought it important that the manager of Charlottesville Fashion Square know that he and Catherine "deeply Love (NOT to be confused with the act of intercourse) and care for each other with honesty and compassion."

At the Applebee's date, Chris gave Catherine a mix CD, "Three-Quarter Woman", containing a bland morass of bubblegum pop and videogame themes. By this time he had also given Catherine some original artwork, which seem to illustrate how the trolls had destroyed his life, and how Catherine had revived it by, uh, zapping electricity from her nipples into his. One of the songs on his CD was "Jump Start My Heart" by Melanie Safka, so maybe that's the allusion.

Chris later sent Catherine the following photos in an attempt to entice and seduce her:

On 2 September, Chris tried to guilt Catherine into committing to him by sending her vows for their Relationship as Sweethearts, Soul-Mates and Partners. He also reportedly offered to send Catherine his fabled Amnyfest Ring, but she refused it.

Catherine also obtained a never-before-seen Christmas video in 2004, from the Director's Cut version of his Christian Weston Chandler...Yep, I'm on TV :) DVD.

How Chris screwed up so soon

Main article: I Love You, Catherine

In late September, Catherine went to a bachelorette party and wedding in New York City, leaving Chris all by his lonesome in Virginia. Ever since first meeting each other on OKCupid, Chris had claimed to want an "open relationship," for reasons which (as yet) are not entirely clear. Catherine decided to test Chris's commitment to this challenging arrangement by meeting a rich, handsome JERK named Colin, joining him for dinner and a sailing excursion. Given that he and Catherine had just had an argument over finances, Chris's paranoia was raw and open. Without knowing a thing about him other than he was wealthy, and even after being assured by his gal pal Shaina that Colin was "from a good family and was of good character," he immediately emailed Colin:

Even before Colin had finished laughing at him, Chris realized that this had been a mistake. "I am Soo dumb and retarded!" He had not only opened the door to more troll persecution, but he had widened the distance between himself and Catherine. Catherine received word about Chris's outburst and chewed him out for it. "UGH!!! I Majorly Screwed Us Both Up!!! Got Dang It!!!"[10] Subsequently, on 4 October, he volunteered to make a rare public YouTube video apology. In the description he stated that he will "become a better Lesbian Transgender Sweetheart and Partner".

Chris did everything he could to persuade Catherine that he had learned from this mistake and now understood the true meaning of an open relationship, but the damage could not be mended. Catherine was willing to go on a bowling non-date with Chris, but as friends only. Chris didn't want to hear this. On 9 December, Catherine finally said the words that got through: "I just don't want to be in a relationship with you."

Chris spent the next several days hurling abuse at Catherine, essentially denying her the right to break up with him.

By the time he had calmed down, Catherine no longer wanted his friendship.

Prior to the actions of the Idea Guys in 2017, Catherine rivaled BlueSpike as one of the most polarizing trolls in Christory. When it was revealed that she wasn't real, many Kiwi Farmers were disappointed. After all, having female trolls assume a persona and "date" Chris is hardly new. Not only this, but many of them felt that Chris no longer deserved to have his life controlled by trolls, and that he'd suffered enough.

Poetically, however, later the same month Chris alienated his sympathizers after he assaulted an innocent person with mace and broke two other laws in the process. This deranged behavior had nothing to do with troll activity; Chris undertook these actions entirely on his own impetus. This suggests that Chris's insane antics will come to pass irrespective of what trolls may do.

Furthermore, in the following months, Catherine's correspondence with Chris and her side of the story were steadily leaked on Kiwi Farms, resulting in her being largely exonerated of her abuse of Chris, mainly because it turned out Chris himself was not exactly blameless, and the main purpose of "Catie" had been to try to contain Chris's growing madness and to help him, rather than to make bizarre demands of him or manipulate him in the ways previous sweethearts had. It was revealed that Catie had tried to tell Chris repeatedly that their outings together were not dates, and eventually that she was not interested in dating him, as he began to attempt to control her in ways eerily resemble of domestic abuse, namely, trying to prevent her from seeing male friends and exploding with jealous rage when she did, insulting her, refusing to let her break up with him, making deranged claims of royal lineage in a bizarre attempt to command authority over her, and even claiming that he was entitled to a relationship.

However, on a poll made by Kiwi Farms member "Darwin Watterson" on the least favorite troll and saga, Catherine got second place with 21.3% of the votes as of September 2016, second only to BlueSpike. Many Farmers commented that the saga was a completely pointless, overly secretive, and weenish one.[13]