One of the earlier examples of the phrase, as a 'Very Honest Content' advisory on Chris's DVD.

Chris believes that, in order to be "honest," you must give away excessive amounts of personal information about yourself. Therefore, Honest Content refers to Chris's tendency to tell random strangers about very personal and private details about his life against his better judgment, usually to no benefit to himself and to the benefit of his trolls.

While honesty may be the best policy, Chris has a poor grasp of what honesty is or when it's inappropriate to be "honest." Worse still, he seems to think the only way to attract a woman is to be 100% honest. Like with many of Chris's strange mannerisms, this is likely linked to his autism; autistic individuals often have little to no social filter, causing them to say things they shouldn't say. Chris just so happens to take this to ridiculous levels.

However, Chris will usually not be honest about things that actually warrant it, like how he honestly didn't really go on a date with a girl named Chloe or that he was honestly fooled by trolls or how he honestly never went to Redmond. Likewise, according to Bob[1] Chris never told him anything, suggesting that he was not honest with his own father.

Chris's tendency to reveal too much information about himself ultimately led to his downfall, when, while talking to a troll, Chris casually revealed that he had been engaging in incest with his mother Barbara. The fallout of this information going public eventually led to Chris being arrested and incarcerated, and losing access to many of the personal pleasures that were available to him at home. 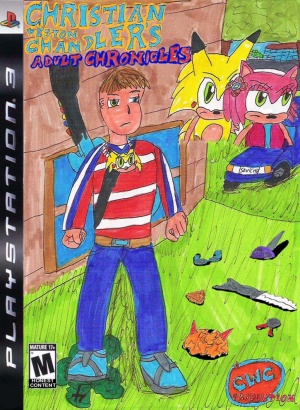 The term "Honest Content" is derived from Chris's DVD which has a parental advisory for "Very Honest Content", despite said content being harmless and far tamer than certain other works.

Likewise, it appears as a content descriptor in the ESRB rating for Christian Weston Chandler's Adult Chronicles. This fictional video game's Honest Content is apparently enough to earn it an M rating (for users 17 and older).

Upon meeting you, Chris will be happy to "honestly" discuss his:

His honesty, however, isn't limited to the horrible, but also the insane. When mentioning his first name-change, he always credits both God and The Bear. Similarly, when talking about Sonic being his childhood hero he always clarifies that his hero was originally Robert the American Rabbit. Whether or not he thinks he'll hurt the Rabbit's feelings if he doesn't make that distinction is unknown, though judging by the quite illuminating conversations Chris had with Alec it's entirely possible, since Chris believes that all fictional characters are "real" to some degree.

Despite being candid about just about every little personal aspect, including addresses and phone numbers, Chris will rage at you for supposedly stealing "private" information that he himself has disclosed.

"True and honest" (or "TRUE and HONEST" for added impact) is a common catchphrase among trolls, usually used to describe something that isn't the least bit honest or true. Chris first used it with reference to his love for PandaHalo, and it was often used by Liquid Chris.