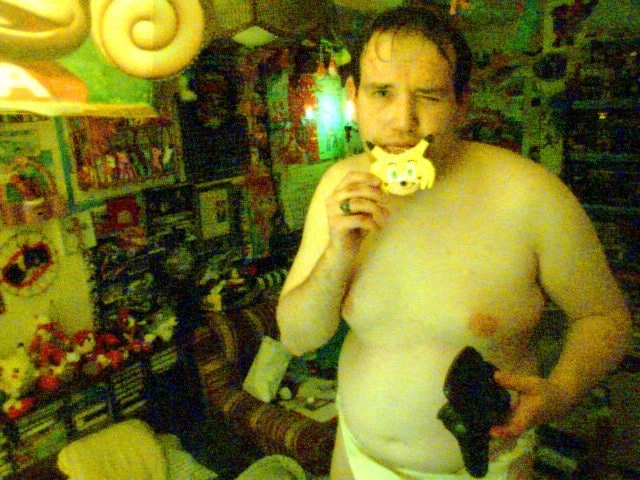 The April 16 Fetish Vids is a set of three videos and a handful of photos, showing Chris engaged in different explicit and quite shocking practices. Chris made all of them for Ivy except the shower dance, which was another audition tape for Vanessa Hudgens. This content was released by The Miscreants on 16 April 2009.

In their conversations about love and life, Chris told Ivy that he recycled his semen to protect his fertility. He also claimed that his semen would taste exactly like what he had recently eaten. To test this hypothesis, Ivy requested a video. Naturally, Chris screws it up, drinking the Fanta only after the fact.

[Chris appears in his room, dressed in a green bathrobe. His hair is disheveled.

This is for my sweetest Ivy's eyes only.

[Chris holds up a small disposable cup made of clear plastic. A thick, white liquid rests in a thin layer along the bottom.]

[He points at his own semen in the cup and brings it even closer to the camera.]

'Bout to that much, that's usually a lot.

[Chris holds a can of Fanta orange soda near the camera. He wears his Amnyfest Ring on his hand.]

Couldn't find any chocolate syrup, but I have some orange soda.

[Chris cracks open the can of Fanta. He fills the bottom third of the Fapcup with soda. He swishes the soda and semen around, with an extremely disquieting smirk on his face.]

[He tilts back his head and drinks the cup of semen and Fanta.]

Chris is depicted spanking himself while kneeling on his filthy, yellowed mattress. Ivy requested this video as punishment for his cheating on her with Vanessa, but she had not specified that he be nude.

[Chris is dressed in a green bathrobe and nothing else. He looks at the camera, kneels on his mattress and begins spanking himself. He doesn't do a very good job.]

How NOT to Take a Shower

Chris dances with an imaginary woman in his beyond unclean shower stall. This audition video was commissioned by Vanessa. She thought he had star quality.

[A disgusting shower stall is shown. The grout is black with mildew and there are large blotchy brown stains on the tile. Two rolls of toilet paper appear in the foreground. Suddenly, the giant fat ass of a white male enters the frame.]

Hey Ivy! May I have this dance?

[Christian extends his hand towards the shower, which is empty except for mold and fungus. He steps inside, and begins a naked slow dance in his shower. His body is only visible from the chest down and his body is completely shaved. His skin condition is hard to describe due to the lighting but looks unhealthy. His hands are clenched tightly, as if he is holding the hands of a small child. About 25 seconds in he tries to twirl, but he has a hard time turning his body around. He stumbles off-balance and catches himself against the wall. He then holds one arm up like he's twirling his imaginary dance partner. At 50 seconds in he makes a hugging motion and leans forward as if kissing his pretend Internet girlfriend.]

[Chris steps out of the tub and walks towards the camera, bringing his tiny, hairless, shrunken genitalia extremely close to the camera. He fumbles at the camera for a second and it shuts off.]

This set of pictures showing Chris wearing diapers ("nappies" in the British dialect), or, as Chris calls them, butt garments, was demanded by Ivy and her roommate as further punishment for his cheating. In Ivy's words, "During the photo shoot Chris decided to lick his medallion and throw a wink our way, as he wanted to 'still look good for me'."