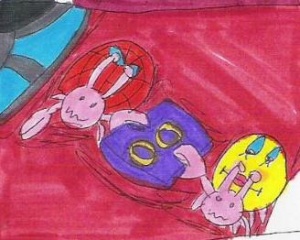 Ivy being Chris's sweetheart du jour, he was fixated on any detail he could learn about her. Beyond even that, he seemed to be psychotically obsessed with her crabs. He remained under the impression that Crass was male and Champ was female, never suspecting that both are actually male.

Chris has produced a video just to entertain the crabs, "wrote" a song about them, and depicted them as the ringbearers in his wedding. Chris has even invited Crass and Champ to accompany Ivy on the plane ride to Charlottesville when she visits him, so that "we can walk the hermit crabs together", suggesting that Chris is unaware that they're probably not real, and thinks that taking care of crabs is the same as taking care of dogs.