The Giant Penis Comic (officially Sonichu Comic Special 3, also known colloquially as PENIS COMIC in the Audiobooks adaptation) is a short comic drawn by Chris, depicting his wedding night with Ivy. It was hacked and published by The Miscreants on 29 April 2009. Besides being a true masterpiece of romance and artistic integrity, it's also notable for having a probable outline of Chris's penis. Shakespeare would be proud. 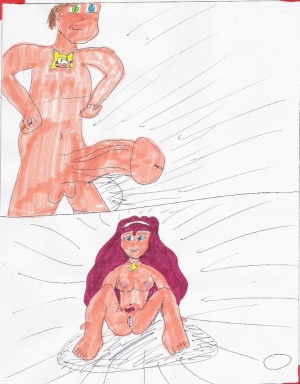 The Giant Penis in question. (Along with realistically-proportioned testicles.)

Following the events of Chris and Ivy's wedding, Chris meets with Ivy's father Officer Keino who, it is worth noting, looks eerily like coach John McGuirk from Adult Swim's Home Movies. Chris immediately begins brown-nosing his new father-in-law, displaying the utmost respect to both the man and the uniform. (This is especially hilarious considering Chris's issues with Jerkops, and Bagget in particular). It is also worth noting Chris salutes him with the "favored two finger Wolf Scout Salute"- Wolf Scouts are the second level of Boy Scouts, roughly 6-8 years old. Keino launches into a speech about what a great man Chris is and how he admires the tribulations our hero has endured. He entrusts Ivy to Chris's "strong, capable hands," which makes no sense, as usually the father of the bride gives his blessing before the wedding; instead we have Keino granting Chris permission to fuck his daughter.

We then see Chris and Ivy checking into the Double-CWC Hotel (A pun on the phrase double quick, and confirming that we are indeed still in CWCville). Chris has also left his pony-drawn carriage in the middle of the driveway leading to the hotel, where Chris has reserved a luxurious penthouse suite (even though the exterior of the hotel does not show a penthouse, nor do we see that their "suite" contains any more than one room). Chris has of course thought of everything—the room is set up with no fewer than five Glade Plug-Ins brand air fresheners, and they will be sharing a meal of grilled chicken, mashed potatoes, greens and chocolate pudding- because every honeymoon should be within the hometown and consist of a romantic $10 microwavable meal.

Chris carries Ivy over the threshold and they are almost immediately naked. Before this, Chris is somehow in The Classic and jeans, implying he wore all of this underneath his suit, or they changed, then proceeded to get naked once again- and Ivy is wearing only a white blouse and bright-pink panties, something that would show through her white dress. Chris stands, displaying his almighty duck, which he draws as gigantic, equal in thickness to his legs. The tip is as large as his own head. Chris seems indeed to have done as Ivy said and traced his real penis - the crookedness is highly evident. Anime speedlines whiz past both Chris and Ivy's naked forms, suggesting that they are about to lose their respective virginities in a high-speed collision. An intense study will reveal that the speedlines are only there to cover up the fact that Chris began to draw a huge scrotum proportionate to his penis (he was probably tracing that, too). It is still visible as a half-circle, complete with half-finished pubes partially covered up by speedlines. The redrawn scrotum is free of pubes and woefully small in comparison to his inhumanly large penis.

The newlyweds copulate for all of one panel before they both transform- Chris into Chris-chan Sonichu, and Ivy into her Princess Ivy fursona (even though Ivy is not wearing the Rosechu Medallion, as Chris stated his future bride would wear it, and instead she wears a star-shaped medallion- why she didn't transform when captured by Clyde is not known). The two wretched creatures assume the doggy-style position, and fuck into the wee hours. As they achieve simultaneous orgasms, both Chris and Ivy have stars in their eyes as they share a solemn thanking of God, but not Jesus, for allowing them to find true furfag happiness.

The comic ends with the two gorging themselves on their $10 chicken dinner, making a toast with wine glasses filled with CWC Orange Soda, and God knows what else. Chris and Ivy share a feeble attempt at humor that was lifted from Home Movies. Strangely enough, despite this comic being set the night after Chris's wedding, neither he nor his bride are depicted wearing their wedding bands. If you look carefully though, there is what appears to be a pair of copper rings on Chris's right hand, indicating a half-hearted attempt, but they are infrequently drawn, and Ivy isn't drawn with a ring at any point. The furry sex was clearly more important to set to paper than consistently and correctly drawing the outward sign of his Christian matrimony.