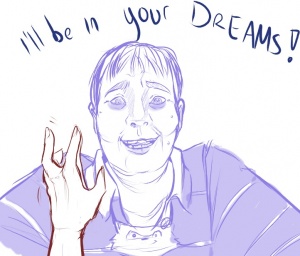 Artist's depiction of the horrors within.

On 20 March 2009, Chris released a short video on YouTube in which he professes his love for his new e-girlfriend Ivy. The video was deleted and reposted by Chris four days later.

This is a notable video as it is primarily shot close up with an emphasis on Chris's face, against the one part of his room with nothing plastered over it. He makes no attempt to establish the validity of the video by either showing off the high school ring or his (new) medallion. The video may be one of the most unintentionally creepy things ever filmed by Chris, with a later video dedicated to Ivy being close competition.

[in a voice similar to one used to talk to a baby with] Hi, Ivy. I love you! I can't stop thinking about you. Mmm, anyway, for both occasions I can say, "GOOD MORNING! Wish you a happy day!", or, as you go off to sleep, I can say "Good night! I'll be in your dreams!" I love you!

[blows kiss and starts to sing] ♪ Ivy, Ivy, love you. Ivy, Ivy, Ivy, at least you're not the poisonous kind. ♪

[in his more regular tone of voice] Seriously, though, I love you, Ivy. I believe you all around.