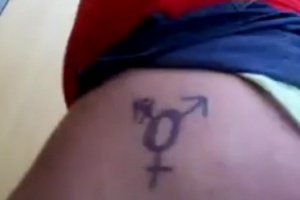 Forgot the Glitter (leaked as vjtuevvjkdufkbjtdv [SaveYouTube.com]) is a video made on 14 July 2011 and leaked on 25 February 2012 in which a distressed Chris performs a jiggle-dance in the changing room of a Walmart for Jackie. Originally a performance intended to be taped in the store's aisles, Chris had to settle for humiliating himself privately in the fitting rooms due to the fact that the store was busier than he had anticipated. The "song" Chris attempts to sing is "Walmart" by Mr. Ghetto, which became infamous for its video featuring women twerking all over the rapper's local Walmart store.

Chris, dressed in his jean skirt appears trying on a brand new red tank top with a price tag still attached to it. The tank top looks way too small for him, suggesting that even if Chris were to buy new clothes they would still look as if he had had them since he was twelve years old. After a short disclaimer he starts wobbling his fat rolls back and forth while uttering nonsense for almost two minutes. In the course of the video, he lifts his skirt to reveal a tomgirl symbol inscribed on his left ass cheek, which he calls his "cutie mark". It appears to be drawn on with Crayola markers. This is a rather curious choice of body art given Chris's continual derision of gay men, as the transgender symbol is traditionally associated with the LGBT community. After nearly half a minute of mooning his audience Chris finally pulls his skirt back down to reveal that he has decorated it with the letters "J.PIE", because nothing says "I love you" to a girl quite like spelling her name with silver spangle on your skirt.