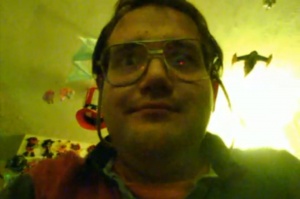 Chris Sings Lovin' You is a terrifying video uploaded to YouTube on 28 March 2009. It's another musical tribute for Ivy, in which Chris does his usual shtick in tributes while his trainwreck of a "cover" of "Lovin' You" overlaps with his monologue. The execution is far more oddly disturbing than it is romantic.

[For the first half-minute of the video, while the camera is trained on his face from below, displaying a creepy smile, Chris has mixed the recordings of his monologue and his singing together. As a result, both are almost impossible to understand, albeit both equally terrifying. The lyrics to the "song" can be found on its aforementioned page.]

My beautiful Ivy, you've done so much for me even though you're not here right now. You've reset my biological clock. You've ignited more emotions in me than any woman has ever made me feel before. You have inspired me all over again, like no woman has been able to inspire me before.

[Cut to a montage of images from Sonichu Special 1. Chris sings in the background. As the montage continues, a disturbing squeaking noise kicks up in the background, which is Chris attempting to provide sound effects for the comics in addition to his singing. Some faint, yet equally disturbing panting is later heard. We cut back to Chris's face, and the song is once again mixed with his monologue.]

I love you, Ivy. Make your journey here safely, and I will wait for you. [removes his pedo-glasses, closes his eyes and makes a hideous kissy-face gesture at the camera before the video mercifully ends.]