Chris Chan VS. The Internet 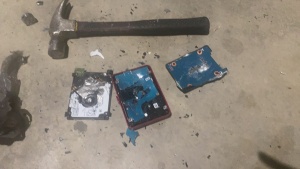 The remains of the hard drive containing the film.

Chris Chan VS. The Internet is a cancelled and (presumed) lost documentary film directed by film student Joseph Draft, which would've focused on the current condition of Chris and the long-term effects that internet trolling has had on his mental state. The trailer and a leaked minute from the opening are the only known surviving portions of the film, and as of November 2020, the film remains in limbo, if not outright lost.

According to Naught, the mostly-completed film was later destroyed by Draft out of stress over film cuts and infighting with some of his collaborators.[2] Naught also claimed that Draft face-doxed himself after a 4-hour conversation once the drive was destroyed.[3]

Geno Samuel talks about what could have been.

When first announced, the documentary garnered significant criticism from Kiwi Farms due to its announcement being through a Kickstarter page via a tweet from Chris, and having a funding goal of $20,000, which was arguably too high considering the film was stated as being completed. The description on the Kickstarter page[4] initially had very little information on the documentary and no breakdown of how the $20,000 of the budget would be used, which led to much speculation on how the money would be spent and how much may be for profit. The page was eventually updated and described that the film had been completed (to a point), included new interviews with Barb and Chris, new interviews with Megan Schroeder and that the purpose of the Kickstarter was to conduct additional interviews with the Chandlers and also with various YouTubers who discuss Chris such as Geno Samuel (known for Chris-Chan: A Comprehensive History) and Sachumo (known for his 2015 documentary and 2017 interview of Chris).

Someone involved with the project posted on Kiwi Farms to do a Q&A which answered few, if any, questions, and only increased the hostility towards the project and its creators.[5] The Kickstarter for the film was abruptly cancelled on 6 April 2019, only two days after its announcement.

According to Geno Samuel, Megan actually wanted to reunite with Chris in person; however, Draft vetoed this, feeling it would be "too corny and forced".[1] According to Naught, eventually, Megan changed her mind on being included in the film, and requested her inclusion be cut.[2] It's not completely certain why she did this, but it's highly possible she realized her appearance in the film could indirectly lead to weens contacting and/or harassing her even more. Naught also claimed that the stress over the matters led Draft to give up on the project,[2] and eventually destroy a hard drive containing the only known copy of the film. Draft also feared that the hostility surrounding the film would also lead to him getting doxxed, so he did the job himself.

According to Geno, "Joe's buddy who saw the footage said they got lots of footage of Chris belching and screaming in public, and was all giddy about it".[6]

As of November 2020, no other copy of the film has surfaced, so it can be presumed that if it isn't sitting on a cloud service or other hard drive somewhere, then the film has been lost.

Chris on the trailer

In September 2020, Chris discovered the trailer on YouTube and later posted his thoughts on it to Twitter. In the tweets, he confirmed that the female voice heard near the end belonged to Megan, and accused trolls of "spamming hatred" and thus getting the documentary cancelled.

[We see a shot of a C-Ville Weekly vending box in the city, and a shot of a Ruckersville entrance sign.]

Chris: [audio reused from this video] Hello. I record this message, in re...in response to the Encyclopedia Dramatica page that has been against me...

[Chris is seen placing a tray of markers on a table, then begins drawing Sonichu on a piece of paper with a black ballpoint pen.]

Chris: Every detail...on that heinous page, against me, is all a pack of lies.

[A montage of Chris walking through a woodland, selecting a pack of Crayola markers at a store, drinking coffee plays. Chris is then seen hugging one of the beagles while the other bays in the background]

Barbara: [narrating] At first, he couldn’t talk. So, he was...err...trained with a speech therapist. His behavior was not normal.

[Chris breathes outdoors with his eyes closed, then the film's title appears, followed by a shot of Megan (from behind) in an antique shop]

Megan: Now, he...he seems like a totally different person to me.

On 12 July 2020, a phone recording of the intro to the documentary was leaked, featuring Chris walking through the woods while singing "You've Been Trolled" and shots of some of his toys.