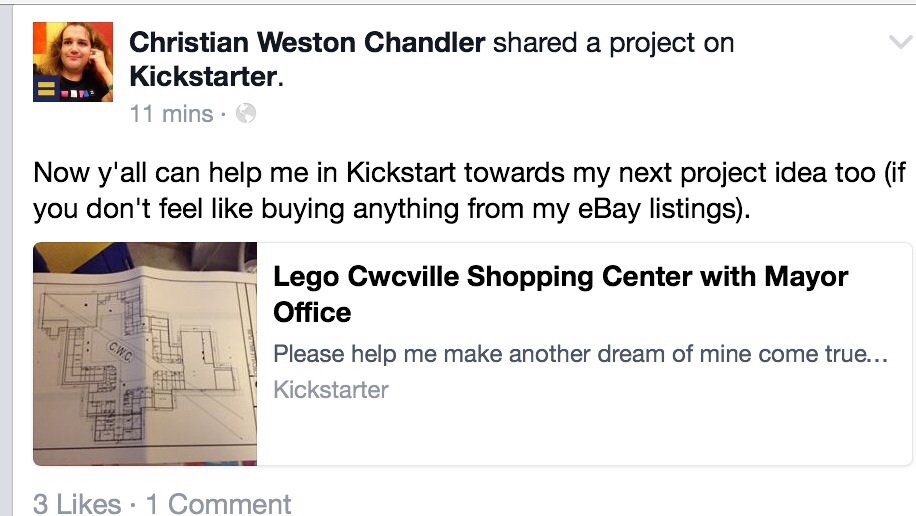 Kickstarter (or, as Chris sometimes spells, KickStarter) is an internet site which allows ordinary people to crowdfund artistic and creative projects to be shared with the public.

Chris used Kickstarter in 2014 to raise money so that he could play with Legos.

In 2022, during the Jail Saga, he mentioned a Kickstarter to attempt to bribe his mother into leaving 14 Branchland Court.

On 23 September 2014, Chris opened a Kickstarter campaign entitled "Lego Cwcville Shopping Center with Mayor Office", and announced it on his Facebook page. The tagline was "Please help me make another dream of mine come true: a Lego stud-to-stud replica of my very own Cwcville Shopping Center". It was listed under the "Sculpture" category. He asked for $5,000 in order to buy multiple sets of Legos so that he could build a version of the shopping mall he had designed as a CADD student at PVCC nearly ten years earlier. The funding period was thirty days, from 23 September to 23 October.

For his video sales pitch, Chris did not create a new video relevant to the specific campaign, but merely recycled the video he had produced the previous year in which he showed off his Lego high school project. He did, however, include an image of the old blueprint of the shopping mall (complete with Sonichu image), produced as part of a college assignment, which he intended to recreate in hard plastic blocks.

Initially, his "rewards" for backers raised some eyebrows:

Observers quickly noted that these rewards were in violation of Kickstarter rules, in that they were not original creations, but merely toys produced by a family-owned Danish company. Characteristically, Chris had not bothered to read the rules of the website he was engaging with. No one was surprised when Chris issued an update, "I have received a notice:"

Subsequently, Chris edited the new Rewards section to say simply, "Pledge $50.00, I will personally engrave a 1X8 Brick with your name onto it, made for ypu and send it to you as well."

Kickstarter rules allow backers to withdraw pledges 24 hours before the end of a campaign. Weens took advantage of this and quickly drove up the amount pledged to over $20,000. Chris received pledges from notables like Clyde Cash and Hideo Kojima. Unfortunately, Kickstarter removes pledges which it deems suspicious, and the pledged amount dropped back to realistic levels.

Ultimately, the campaign failed. By 23 October, 27 backers had pledged $150. According to Kicktraq, Chris raised 3% of his goal, and each backer pledged an average of six dollars.[1] Two people had backed the campaign at the $50 level.

In the aftermath, Chris returned his focus to his money-making ventures on eBay. He has not logged back onto Kickstarter since 4 October 2014.

In July 2022, Chris wrote in jail letters of a Kickstarter to raise $150,000 so that he could buy 14 Branchland Court from his mother, Barbara Chandler.[2] Chris, at that point in jail awaiting legal proceedings on a charge of incest on his mother, mentioned a restraining order between himself and Barbara[3] and believed he deserved to live in the house instead of Barbara and essentially wanted to bribe her into moving elsewhere.