CWC's Pokésite 2 is one of Chris's earliest websites about Pokémon, launched on 22 July 1999. Chris made a poorly translated Spanish version, which shows that his Spanish name is Ricardo W. Chandler. According to the sign, Chris made Espanolic the mascot of the Spanish version.

The email listed on the page is itsameCWC@aol.com, probably a reference to the opening splash screen of Super Mario 64, where Mario says his iconic phrase: "It's a-me, Mario!".

In his resume, Chris proudly proclaims both the Spanish and English versions as having been created from "notepad scratch" thanks to his HTML classes. Given the quality of the sites, it is largely assumed that "notepad scratch" is a euphemism for "pulled out of his ass". Like everything else of a visual nature that Chris has produced, the sites were nothing short of eye rape. The website was spawned out of his fetish for Pokémon and originally featured Sonichu as the mascot.

The site's logo, shown below, was designed by Miranda Joyce Mitchell, one of Chris's high-school gal-pals, as a school assignment. This is why it looks good.

In addition to the godawful aesthetics, the site also has a number of HTML errors.[1] For example, the title image is aligned to the left of the screen, because Chris wrote align=CENTER when he meant align="middle". This would have been obvious to Chris unless he'd been testing the site on a 640x480 monitor (already obsolete in 2001[2]), and it would tend to make his work look even less professional to a software engineer who was considering him for a Web-development job.

Since the website has been at various times hosted on Chris's other fail webspaces, its current status is the same as theirs, which is to say, inactive and archived. He doubtlessly has a copy hanging around somewhere though, since Chris seems to feel that everything he produces is pure gold.

While the site's nominal purpose was to sperg about Pokémon, the content of the site suggests that Chris's ulterior purpose for the site was to sell himself as a cool person and make friends, just as his later Sonichu's News Dash was really about attracting a boyfriend-free girl. Chris hoped that there would be extensive community feedback--the art section was for "drawings from you and me," for example. There was also a "Cool Letters" section, which remained vacant. He practically begged people to sign his guestbook, and, of course, there was the prominent "About the Author" section, where Chris's already-enormous ego was apparent.

This archived edition was last updated on 15 January 2009.

New logo was designed by Maranda Mitchell and Me. :)

To add frames to see my other cool sites, click here! 8)

Please visit again for many Updates, be sure to Bookmark us, and be sure to tell your friends about us, too. And, please sign the Guestbook.

And, if you want to see the original CWC's PokéSite, here is the link.

Clicking this link to brought you to 24 of Chris's homemade Pokémon trading cards, some of the earliest entries in The Wall of Originals.

This page included links to the American and Japanese Pokémon themes. There were also .mpg movies entitled "Pikachu Vs. Raichu", "Ash and Pikachu", and "Team Rocket's Motto". taken from a site called "Pikachu's Place." Finally, under "Programs/Games/Other," one could play five games provided by "Insomniac Pokemon's Top 100 Pokemon Sites."

This was the meat of the website. It included a series of brief updates from the world of Pokémon. Very little of it is original; Chris just relayed information he had read in other publications and sites. There are a few insights into Chris's life during this period. Sometimes homework prevents him from making more frequent updates. He also takes a break during the move from Midlothian to Ruckersville, which he says caused him stress and a dip in inspiration, excuses which would soon become very familiar to his fans. We see that Chris was apparently very upbeat through 2000 and essentially pre-sexual, his mind focused almost exclusively on his Pokémon hobby. Only in a later update to the site, when he was 22, do we first see references to the Lovequest. He also assumes that his readers hang on his every word.

"The Archive Section!" included his earliest stuff, labeled "October, 1999-December, 1999." He introduced it with, "Finally, I am going to start on my own PokéNews section for my PokéSite. I'll start small, but this section will grow...with time."

After the archive, the next series of articles was labeled, "February, 2000-Audgust, 2000." "Here's a big update; the Old News are in the new Archive section! Click on the link on the bottom of the page."

The final section of these brief articles covers 29 August - 22 December 2000.

Here Chris linked to a boring review of "Sonic Adventure, 1999."

Chris followed this with a long list of cards and their qualities.

About the Author: Christian W. Chandler.

The above autobiographical sketch remained largely unchanged for four years. When Chris was 22, he added "Status: Single and lonely." Clicking on these words brought one to a new page which consisted of an early list of his girlfriend qualifications. It varies slightly from the one he included in Sonichu's News Dash, produced around the same time. This reflects his shift in priorities: he had discovered dating, and had begun his epic Sweetheart Search. 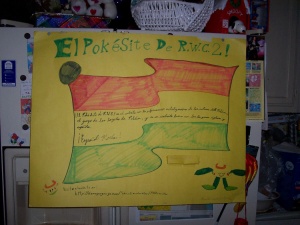 Note the Dutch/Luxembourgish flag, neither the Netherlands nor Luxembourg being associated with Spanish in any way

Chris went to the trouble of translating most of the site into Spanish. He didn't quite finish. Here are some samples: 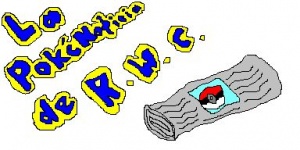 Chris also translated the "About the Author" section. He did not update this translation after turning 18, and so did not identify himself as "Single and lonely" or include a link to girlfriend requirements, as he would in the English-language version.

Seventeen people signed the website's guestbook. Most of the details of the first seven entries appear to have been lost. Since Bob and Barb signed the guestbook of his first site, we can assume that Chris pressured them to sign this one too. On 29 July 1999, seven days after launch, a friend signed and told Chris that she hoped he would continue learning HTML. On 30 September, one Mrs. Johnson signed and said that she knew of "others" who would like his website, and that she would let them know about it. The last ten guests are below. One of them was "Sonichu," who says it's a "terrific site." One was a fellow student. Two were companions from the Pokemon league. The last was from a "friend" from PVCC named Nicole. This is rare evidence of a college peer paying Chris any positive attention whatsoever.

Comments: Good job on the site! I linked to you.

Comments: Hey Christian, This is Maranda Mitchell's sister. Ijust wanted to tell you, you are very good at drawing. Well see ya later. Megan Mitchell

Comments: It is nice to see how your website looks after adding your new logos. Did you tell Maranda that you used her logos on your site? Nice Work. See you in class tommorrow.

Comments: Hi Christian it's Jarrett from the Poke'mon League. I'll prove it our gym leader is Mark. We go to Books-a-Million. Our gym leader used to be Lynn. See you Saturday.

Comments: Hey Christian!! Just checked out your page. Pretty cool!!! I liked the pokemon cards you drew up. Oh, do you know who I am. I met you at the Toys 'R Us league. I beat you with that Moltres stall deck, remember? Good luck at PVCC...and keep the site updated (if you've got time)!! Hasta Lavista, Jason

From: Born in MI, live in VA

Comments: Hi Christian! Good job! I would never be able to do that. Good luck in all that you do. Your friend from PVCC- Nicole