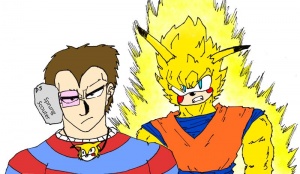 Dragon Ball is an anime franchise, which follows the adventures of the protagonist Goku as he trains in martial arts and explores the world in search of seven mystical orbs known as the Dragon Balls. The series is known for having high-speed, flashy, colorful battles and choreographed attacks, so it's not hard to see why Chris would like it.

Chris presumably attempting to emulate Goku during a fit of rage.

At the "About the Author" section of CWC's Pokésite 2, Chris lists Dragon Ball Z and it's pseudo-sequel Dragon Ball GT as among his favorite anime.[1]

Chris's "Curse-ye-ha-me-ha!" (or it's retconned name "Shin-ye-ha-me-ha!") is a blatant ripoff of the "Kamehameha," an attack used mostly by the protagonist, Son Goku (as well as by other characters).

Chris also stole the Dragon Ball plot device from the series, where anybody that gathers all seven Dragon Balls is granted one wish. Chris, of course, ingeniously changed the name to "Sonichu Balls," assuming people wouldn't be able to tell the difference, though it should be noted Chris only stole the name from Dragon Ball. The actual idea on the other hand was swiped from the the Chaos Emeralds from the Sonic the Hedgehog series, which were themselves were Dragon Ball ripoffs, only instead of granting a wish, they allow the characters to access their super forms.

In Punchy's backstory from Sonichu #3, his tail is ripped off by his opponent, Mypoe, who declares it to be a weak point. This likely derives from the physiology of the Saiyans, who are born with monkey tails that allow them to transform into their Great Ape forms and can also be chopped off to increase their power. Coincidentally, at the end of his backstory Punchy describes himself as "the greatest fighter since Goku."[2]

In a Mumble chat, Chris stated that his favorite character is Videl.[3]

On 16 September 2010, in a cosplay video addressed to Jackie, Chris appeared in blackface as the Dragon Ball character Mr. Popo, an immortal genie.[4]

In 2020, Chris attempted to make a mod for the Sonic fan game Sonic World featuring himself, using a retextured model of Dragon Ball Super character Kale as a representation of himself.[5]