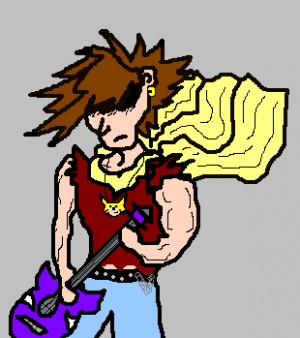 Chris, as he imagines himself to look. 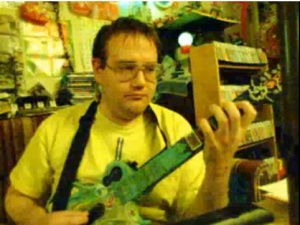 Chris, as he is in reality

Guitar Hero is a series of music rhythm video games where one uses a guitar-shaped controller to activate the notes of a song as they scroll down the screen, similar to Dance Dance Revolution and its dance pad controller. Being one who very much enjoys music, Chris undoubtedly bought many games in the franchise during its lifetime.

Chris owns a Dance Dance Revolution set-up, as well as other popular music games like SingStar. While DDR and many Wii games involve actual movement, sometimes to the point of players breaking a sweat, Guitar Hero remains the only game which Chris has mentioned using for exercise, even though DDR has an exercise mode and the Wii has numerous actual exercise titles. Specifically, Chris has stated several times that Guitar Hero is good for his health, because he has to stand up to play it, "and move a bit for fun and movement."[1] Chris's reasoning either comes from his autistic mind believing that any muscle movement at all is exercise, or him being so fat and lazy that standing up actually takes effort. Because standing still and pressing buttons on a plastic guitar is far less strenuous than moving your feet on a dance pad, Chris has favored Guitar Hero more, and has made references to it several times throughout his many works.

Data from his PlayStation Network account reveals that Chris spent nearly $500 downloading new songs to play in various Guitar Hero games. By comparison, he spent a little more than $50 on downloads for its closest rival in the music game market, Rock Band.

Chris has appeared to show some decent skill level in Guitar Hero games. Even when rivals poke fun at conspiracies behind mysterious orange notes (if you catch their drift), Chris has been able to survive songs on hard difficulty, as shown in some of his videos. Sneakily enough, he just says the expert difficulty "is good"[2] – we have never known if he routinely plays on expert or not.

Here in the real world, people anticipating playing the game think Guitar Hero will be the most awesome music game ever, one that really makes you feel like a rock star...until they play it, at which point they realize that they're just mashing buttons on a plastic guitar. Actual guitarists have said that Guitar Hero doesn't help you learn to play guitar, and have themselves struggled playing the game--they said they needed to first forget everything about how to play guitar. Even those who enjoy the game can see that a real guitar fretboard neither looks or functions like the guitar controller's buttons. Heck, the controller has little in common with instruments that actually do feature buttons, such as the keyboard or trumpet. In Guitar Hero, there's no consistency between button and note.

Chris, however, seems to believe that playing Guitar Hero is a feat on par with playing a genuine guitar. For example, in Sonichu #10, Chris takes his PS3 and Gitar of Fail with him on his band tour. During Sonichu #8, he also explains that Blanca plays the Guitar Hero for Jiggliami's band, which implies that the band only performs covers of songs from the games. In the SingStar Challenge, Chris specifically forbade the use of real instruments as well as Guitar Hero guitars. In what may be the most mind-blowing example yet, Chris dismissed a real, actual, non-video-game-controller guitar as a "Wooden Nickel".

Because Chris thinks he's talented in every respect, he also loves to pretend he's a musical geinus, evident with his hypothetical band Christian and the Hedgehog Boys wherein he tunelessly wails over low-quality recordings of popular pop songs. However, because he doesn't know how to play an instrument, he feels the need to justify himself by claiming Guitar Hero gives him musical ability. We can only wonder what exactly was going through his head when he shredded with mad apathy in the notorious "Holding Out for a Hero" music video (the song itself has no guitars), and wonder whether he can tell his "guitar" doesn't make any sounds besides plastic clacking in his cover of "Don't Laugh at Me".

The Guitar Hero games, later entries in particular, base themselves around the idea that rock music can do anything, as seen in classic rock videos and album covers. Chris has seemingly taken inspiration from this for his comics, such as Sonichu #10, where he uses the Power of Rock to demolish the 4-cent_garbage.com building.

Chris has also developed a completely groundless belief that standing on one leg and moving a little while playing Guitar Hero amounts to tremendous physical exercise.[3][4]

GameStop Be A Star Sweepstakes

The GameStop "Be a Star" Sweepstakes was a competition run by the video game retailer GameStop to promote Guitar Hero: World Tour, which Chris entered around October 2008. The competition required the entrants to send in a photograph of themselves in a "guitar hero pose", and people would vote in a poll to determine the best one, with the winner receiving a $400 GameStop gift certificate.

Rumors also circulated that the winner would star in Guitar Hero: World Tour. Several trolls caught sight of Chris's entry and encouraged people to vote for him by posting on /b/ and ED, in hopes that gamers everywhere would help permanently mar Guitar Hero's legacy with Chris's fat autistic presence. These rumors however, proved to be incorrect.

Despite some disputes between trolls as well as some warnings to GameStop's management about what was transpiring, Chris went on to win the competition.

In his 28 December 2008 update he thanked his fans for voting for him, and announced that the $400 gift card would be shared with the congregation of his church. Chris ended up spending a little less than half on his congregation, buying them a copy of Animal Crossing City Folk ($50), plus two copies of Wii Music ($100) with a Wii Speak accessory ($30) for a grand total of $180. The remaining $220 went to himself.[5]

Although his victory is largely considered a major failure in trolling efforts, it did have the unintended side effect of reaffirming Chris's belief that he has a huge thriving True and Loyal Fanbase. This made trolling somewhat easier, as Chris was even more inclined to open up to his supposed legions of fans. Some trolls have used his victory in the contest as leverage to guilt him into doing things like giving interviews or drawing more comics.

On 27 October 2008, Chris uploaded a video showing off the custom Sonichu crap that he added to the game. As in his comics, he portrays himself as thin and fit. While this is partly because that game doesn't have an "unpleasant, fat" character model, it would still be possible for Chris to give his in-game self some degree of huskiness if he had any sense of his personal appearance.

Music is just another way to get china for Chris.

Video games are no longer the passive form of entertainment they used to be--they're also a breeding ground for the creativity of the gamers. Like all enthusiastic gamers, Chris unleashes the full force of his creativity and puts a lot of thought into his video game play to get maximum satisfaction out of these games. Unfortunately, this is obviously not going to work as well as it does for some other, more gifted people.

Guitar Hero games allow a great degree of fun but ultimately useless customization that doesn't actually help the game, such as creating virtual band members. In yet another feeble attempt to prove he's not a homo, Chris's bandmates are all women, because what girl wouldn't want to jam with the artistic genius that is Christian Weston Chandler? He also picked some very odd names for these characters, with the black one oddly getting a Jewish surname.

Though this might not seem too ridiculous at first glance, two facts make it worse. First, the first we heard of these bandmates was through a leaked Rule 34 picture. Among fiction writers, blatantly pornographic imagery is hardly considered the best way to introduce new characters to the world (though some may argue it's probably the most profitable). Chris drew himself having sex with these virtual women, and proceeded to make a video about it, announcing it as a testament to his straightness.

Secondly, he seemed to be a little bit too preoccupied with the idea, to the point that people begun to think he really believed he bonked these nonexistent chicks.