The SingStar Challenge was a video competition phase of the CWCivil War, initiated by Solid Chris. 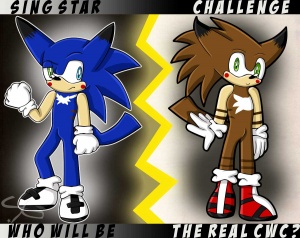 Previously, Solid (posting under the YouTube handle IBAChandler) had attempted to reestablish his TRUE and HONEST identity with videos showcasing his multiple talents. This cunning plan backfired miserably, as Liquid Chris (posting as CChanSonichuCWC) outdone Solid's talents in his own videos. This included playing More Than a Feeling on a real guitar, shaming Solid's Guitar Hero rendition.

Butthurt that Liquid had an actual talent, Solid recognized that the clear solution was to formalize the contest, thus eliminating such dirty tricks.[1]

Alright, Christian, Mr. Brown-Striped Impostor, since you have been able to accept and complete my question challenges, it is time to issue a new challenge. I challenge you in a SingStar competition. The rules are simple. We are to each pick one song out of our libraries, our own playlists, and sing them verbatim with out any printed lyrics and with out any karaoke. 'Quipment.

And I will show you right now how fair I am. My room layout.

[pans around his overstuffed-with-junk room]

[camera returns to Solid in frame]

[sigh] And if it-and also we must have the mp3s played behind us, so therefore no musical instruments its so-what so ever in any video. And... only... in song number five, no song before, we [sigh] will allow each other to pick one song and challenge the other with that song. And the deadline for each uh, up, each uploaded song is etsa-approximately 24 hours from the previous one. So your song number one will, the deadline for that will be 24 hours after I upload and p-start my first st-song. [sigh] So, with that we will soon be commencing with the first track, "Sonic Boom" [holds up Sonic CD cover]

my speakers over there,

my camera will sit here

[camera moves back to Solid]

the only thing that I ask anotherly—anotherly in this, no separate microphones but only the microphones on our webcamps. [holds up a mirror to reflect the camera]

Oh, I forgot one thing, you may use your mp3 player of choice. My PSP is mine, attached to my speakers.

[Solid once again sets down the camera]

You may show me yours in your first video, Mr. Christian.

Any mutiny against the rules I have set forth in this video will be [sigh] [dramatic glasses removal] not countable. And you will have to do it all over again.

And so with that

[footage of the infamous shave is inserted]

[starting to remove square medallion] Ow! [removes square medallion, holds it up to the camera to read: The Good Life) [starts to shave goatee dry] [after eleven seconds the head comes off the razor, Solid reattaches it and continues shaving, then sets razor down]

[one second into new scene razor head falls off again, Solid reattaches again and continues to shave until goatee is mostly gone]

—rst thing, no imported music. Which means no Japanese, no Spanish, no German, no odd country language. Only English. Shame, would loved to play "Sailor Star" or "Flame Sniper"[2] [makes motion as if getting ready to fire an arrow from a bow]

And also, once a song has been sung, of that specific title, from that specific band, it will not be reusable in a future song. Neither by you, neither by me. Abide by the rules.

[Solid is once again holding the razor] Game on. ¡Abre la contesta! [Spanish for "Let the contest begin!", except that "contesta" is not the correct word; "¡Abre el concurso!" would be correct.]

After round five finished, Solid began a campaign against Liquid on various fronts, mainly through video:

Liquid was not happy with these events and began his crusade for vindication:

A Winner: There Can Only Be One

Even to slow-in-the-minds, it was clear that several rules contradicted themselves immediately, such as not being allowed karaoke equipment but being allowed to play the song itself in the background. Happily, Solid couldn't have chosen a worse medium for a duel, as Solid is so tone deaf he doesn't even realize that he is tone deaf. In his mind, his singing voice had "a Frank Sinatra or Bing Crosby flavor,"[4] making him a sure-fire winner.

After losing the contest, Solid uploaded The Contest NEVER was to Determine Who was Who, where he pulled a massive retcon out of his ass and said the contest was just for fun.

This saga marked a new take on previous attempts to make Solid believe that someone else was taking all the fame and glory of his Sonichu creation. By confronting a doppelgänger who was successful in everything he tried to be, Solid began to show a violent side of his psyche. While fruitlessly trying to prove that he was the TRUE and HONEST person, his actions produced a surge of content unparalleled to anything produced in 2009, even to the point of jump-starting the production of Sonichu #9.