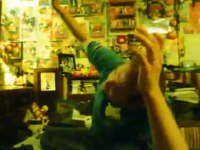 The third round of the SingStar Challenge had IBAChandler singing "Autumn Goodbye" by Britney Spears versus CChanSonichuCWC singing "Heaven" by Bryan Adams.

For his third song, IBAChandler does Britney Spears's "Autumn Goodbye". He also sits and makes gestures as if he were driving a car, for whatever reason.

You think you're so tough, jumping in on the last minute, huh? Well, it won't be so easy next time, I'll tell you what. But anyway, now for the next track. Here's a favorite I love to play in- when I can play it in the Playstation 3 games are Pain and Burnout Paradise. Take it away, miss Britney Spears.

Stay tuned for a bonus feature, for the impostor in brown...

Before I give it off again, let me go through a brief bit of history. Some of my yearbooks... Now it's 1995, in Providence Middle, let's look it up. Hmm... Christian Chandler, oh, all the way, over here. [Gets to the penultimate row of photos, his face being the first] So many memories... Oh look, some of the faculty, some of the faculty... very good. Now, let's see if we can find my favorite faculty member in this book... my favorite teacher... who gave me so much in-spir-ation... so much inspiration... ah, here we are. Remembering you is easy...

Okay, I found the page. Same book. here's a groupa-picture- here's a group. And in row one, on the bottom... ah, I can't make it out with the camera, but that's me right there. Varsity basketball team, my freshmen year. Joseph Herring on one end there. Good ole Joe... Mmm, let's see, 1998 book. I would be a sophomore this year... Speaking of which, have you taken a good look at that impostor? He is so sophomoric, he's gotta be like thirteen or sixteen. Ch- check his real ID, police people? Please? [mumbles] Sophomore. At this time, I would have been sophomoric, by way back then... here I am, right there on the end.

Next book. 1999! Manchester high school, still. Ahhh, the junior year. Ahhh, let's see, junior... Ah yes, here we are. One two three four. Here I am! [points at a picture of a long-haired girl]

Onetwothreefour. There I am. [Points at his picture this time] Aaand... SENIOR YEAR! Señor... I turned eighteen in the year 2000, and let's see how good I looked... I looked GREAT. Handsome little fellow. Handsome eighteen year old. Back in the year of 2000! Graduated with my class, class of Y2K! Tiffany, thank you for that dance at senior prom, I will pay you at our reunion. Now, I have a new question to put forth to the man in brown. If you have your books, you may show them, whether they be counterfeit or not, you'll just be nailing another nail on your coffin for the real police to find!

But anyway, something about your mother and your father. What are their jobs? What are their occupations? Tell me the details, in a separate video, when you do your third song. [Points at camera] Your play!

[inhales] Mmm. Hello again, impostor. Impostor Christian Weston Chandler. Well, mmm, got nothing much to say to you, except I hope you like my next song, that I dedicated to my sweetheart, Kacey. Kacey will always be my true sweetheart, because she is honest and caring and loyal. Enjoy.

Your turn, impostor! Your play!

Captain's Log, Stardate: Monday, August 3rd, 2009. [pause] My mother is Barbara Ann Chandler, born October 1st, 1941. She was a secretary for a good many years, and retired in 1998. And, sh-- and my father said that she looked just like Liz Taylor when she was young... [sighs] I wanna say that, uh, yeah, uh, my, my father is Robert Franklin Chandler, Jr., hmm, born, uh, on the, on the 4th of September, 1928, he worked at General Electric and has seven patents. Hmm. Uh, you shouldn't be, shouldn't be making me do this, I mean, this has relatively nothing to do with the singing competition whatsoever. Hmm... but I'll just keep continue to do it anyway. Hmm. Uh, my mother met my father at a bar, my mother used to work as secretary at Virginia Power. She retired, and, uh, took up music... and, uh, you know, that means that the Pokémon Flute that I bought her just recently will come in handy. Hmm. And, uh, you know, my, uh, my father was drafted in World-- in, uh, he, uh, he went to Korea, he-- before it was split into two nations, and, uh, he went to college on the G.I. Bill. He studied Pre-Engineering and moved on to Auburn University to, to earn his engineering degree. Hmm. He, uh, worked at Western Electric, and, uh, and got the offer from General Electric, uh... but anyway, he has made many patents including these.

[Montage of sites showing patents made by Chris's father. On the final page, Chris moves the camera close to the screen, emphasizing the words "Chandler et al."]

But anyway, uh, he is so smart that he is on Google. Yeah--[jump cut] So, he is now retired, and chops down wood in his spare time. [voice breaks] I bet you, impostor, you don't even appreciate your parents. So there, [dramatic glasses removal] you troll! [puts glasses back on] And now for something completely different: I have confirmed the true name of the slanderous impostor, and it, his real name is [extends a finger for each initial] I.B.A. [gestures into camera] Ian Brandon Anderson. And a big, and a big detail you, you may, you may have, you might have not, uh, overlooked: [holds up a picture of Chris in his mother's panties and bra] I have your mugshot. [mocking the Secret Weapon video] I can't even stand to look at it! Look at those double-D cups! You're a FREAK! Ha ha ha ha, HAAAA!! I scoff at you, you ugly freak! [slams the picture down] And to his latest video saying that he's true, because he got trolled by figures such as Clyde Cash, I got trolled by Clyde Cash, just not last week. That didn't prove anything, and you are still a coward, for trying to make this contest less important than it already is. Whoever wins, in the, is the true Christian Weston Chandler. The end! No dots about it! [gives peace sign] Peace. Have a good day.