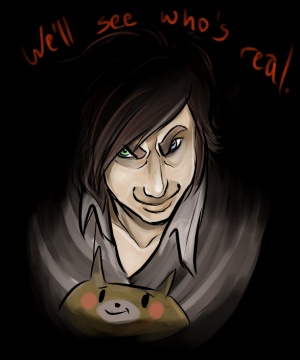 "15 October 2009" (officially "10152009") is a video where Ian Brandon Anderson acknowledges the return of the TRUE and HONEST Chris. He also continues to "call out" Clyde Cash/Gregg Mays.

The introduction "Captain's Log" is absent in this video, as with some recent videos, to the relief of Star Trek fans everywhere.

Earlier that evening, Liquid posted his first video in months describing the trials and tribulations of the past few months:

Liquid describes his heroic survival as he was kidnapped, force fed tobacky, then brutally assaulted and raped in the ass. Liquid found himself in the middle of the Sahara where he journeyed for miles, seeking water, and as he was about to die from thirst, some "friendly Aladdin people" came to his rescue and helped him return to his home of Ruckersville.

Solid responded the same day with a rebuttal to Liquid's video, saying the events that he described were neither true or honest. Midway through, he suddenly launches into his own advertisement for The Cleveland Show.

Yes I have uh, reseen the, uh...return of the impostor in the blipe--in the brown stripes. [stress sigh] He dares call me by that stupid Ian name? [grunts and shakes head] Stupid. Everybody know that is fa--that that name is fake.

Anyway, the on--I will only respond to him this one time because he is a lowly troll, and I just do not give a dang about him. I mean, come on, his story, I mean like, you know, being put in a meat factory, Sahara Desert, Aladdin people?! Huh. And also, he coulda easily put, he could have easily taken the drugs himself, even to make his own ass bleed. I mean, that story, it's just about as incredibly fabricated as (looks left of camera as if to read a script) Donna Tubb's time over at when she had to borrow R. Kelly's bathroom, or Roberta when she fought off 6 Al-Qaedas, one by one! The Cleveland Show, new episodes Sun--every Sunday on F--on Fox, and episodes downloadable on PlayStation Network, and iTunes. Cleveland Show! [laughs retardedly]

Ah, anyway, the main concern here is that defintly--uh, definitely me drawing the comic pages which I am still doing...and, takin' down, the Billy Mays/Clyde Cash whoever the hell he is. Do not beli--and continue to not believe...that...his name may be Christian Weston Chandler, but everybody knows that he is not the original guy, I am. The guy was born in Ruckersville, Virginia, his birth name was Christopher.

So there.....and I'm still here. I'm still waitin' for ya, Gregg Mays. I know where you are. You are...within this state of Virginia. And I am still waiting for you...to accept my challenge.

Anyway, aside from that, expect a few more pages this weekend on the CWCipedia: the official Sonichu and Rosechu site. Thank you and have a good day.