From CWCki
(Redirected from Ruckersville, Virginia)
Jump to navigation Jump to search

Ruckersville is a census-designated place in Greene County, Virginia, and part of the Charlottesville metropolitan area. It also happened to be the home of Chris and the capital of all things Sonichu-related, until August 2021, when Chris's arrest for incest saw him relocated to a jail in Orange, VA. Chris and his family moved from Ruckersville to the Richmond suburbs after their dispute with the faculty of Nathanael Greene Elementary School, only to return in 2000.

Ruckersville markets itself to tourists as a "scenic, tight-knit community that offers panoramic views", a "safe, friendly, and welcoming community in which to raise a family or quietly retire" and "a vibrant and growing downtown, notable for its antiques market, a new Wal-Mart and great potential for expansion". In reality, Ruckersville is a dull, boring, suburb of a suburb of Washington D.C., full of cheap, ugly houses and even uglier lawn furniture: a sleepy location without any real tourism to liven itself up; somewhere with no real business or career opportunities, a place where people hoard their trash and decorate their yards with broken lawnmowers and junked cars, and where even a family as infamous as the Chandlers can exist relatively unnoticed. Even so, over 86% of the town's population from before Chris moved back has since abandoned it for Charlottesville proper to the south.[3] Given its dwindling population, Ruckersville has very little in the way of recognizable landmarks or entertainment. The only noteworthy person born there is NASCAR driver Philip Morris (no relation to Philip Morris USA/International). The lack of prospects or opportunities suits Chris perfectly, as it gives him one more excuse never to leave his room, let alone get a job. 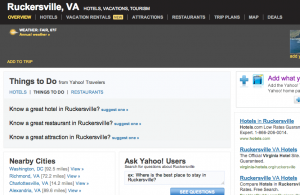 According to the Internet, there is literally nothing noteworthy in Ruckersville.

Chris claims to hate living in Ruckersville, as evidenced by his complaints in various videos, but only because he'd rather be in a near-identical suburb where he thinks he could squander the remainder of his life in a late 90s time-capsule of his high school days.

The geography of Ruckersville is incredibly plain. Its surrounding landscape, composed mainly of fields, thin forest, and meandering housing developments, extends from the larger settlement of Charlottesville. Even the terrain is boring, although the Blue Ridge Mountains are a short drive away.

Housing prices in Ruckersville are generally decent,[4] but this is most likely because it is the epitome of a commuter or dormitory town, being almost entirely meant for people who work in Charlottesville to come home and promptly crash into slumber, with very little else to offer. Crime rates in Ruckersville are also happily, if unsurprisingly, low, with zero murders and only two rapes on record. That said, nearby Charlottesville has contributed to this low crime rate, as Chris is more than happy to waltz over there to commit his various misdemeanors, and likely so are any other criminals living here.