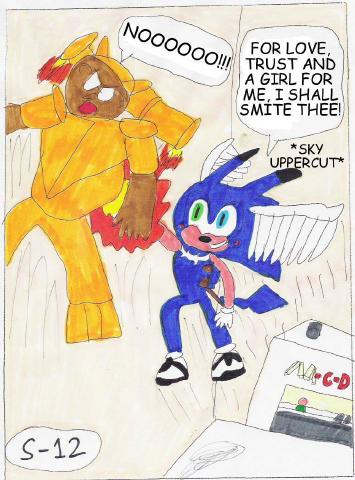 A typical visit to McDonald's in CWCville.

McDonald's is Christian Weston Chandler's favorite restaurant. His ideal first date would take place here.[1] His favorite items are the eight-piece Chicken McNuggets[2][3] and the $1 sweet tea,[4] though he has claimed to get salads more often when attempting to get in the good graces of female friends.

Additionally, Chris's preference for McDonald's was symbolic of his conflict with his dad, who preferred Burger King.[5][6] How truly American!

Chris met the real-life B-Manajerk and his partner, Merried Seinor Comic, in a Wal-Mart McDonald's in June of 2005, an event which would later be dramatized in Sonichu #3.

It is probable that Chris's inactive lifestyle and frequent patronage of McDonald's is the cause of his obesity. The number of times Chris claims to eat there, two or three times a week,[7] is equivalent to going an average of 130 times a year. During his phone call with Kacey and her father, he claimed to have cut down to one McDonald's trip per week at best, and even that was unquestionably a lie told to impress Mr. Devoria - once a week would still be more than enough to cause health issues, depending on the foods Chris orders. The frequency of his trips to McDonald's were confirmed in 2015, when a Kiwi Farms user gave Chris $500 to see what he would spend with it; the eventual list of purchases made showed that Chris went to McDonald's 10 times in 13 days--and that's not even the only fast food place on the list.[8] At this rate, Chris could probably develop serious medical problems - heart disease, high blood pressure, and type 2 diabetes are known to result from constant consumption of fast food.[9]

The trouble is that Chris doesn't seem to realize just how unhealthy fast food actually is. He barely understood that fast food was bad for one's health until roughly the Liquid Saga, when at Kacey's behest he made a feeble effort to clean up his act as far as exercise and eating right. This mostly involved eating salads at McDonald's instead of his usual eight-piece box of chicken nuggets.

In a display of nutritional ignorance, he claimed that having grilled chicken with his garbage food was better than having breaded chicken. In all fairness, grilled fast food items are generally less fatty than breaded ones due to not being fried in unhealthy oils. Still, with them being heavily processed fast food items, they shouldn't be eaten in the frequency Chris eats them--and whether or not he strictly or frequently eats grilled fast food is unknown, but probably unlikely. The "side salad" that he occasionally mentions eating is one of the more inoffensive items on the McDonald's menu, and grilled chicken salads are also not as unhealthy as most of their products. However, these salads are frequently drowned by fat people in cheese and high-calorie dressing. Chris claimed once (in effort to impress a girl, natch) that he refrains from using dressing, but given that he seems to have a dislike for foods without copious amounts of fat, salt, or sugar, this is almost certainly untrue.

Also, the sugar content of a small McDonald's sweet tea is 24 grams.[10] The recommended daily intake of added sugar for an adult is about 36 grams for men and 25 grams for women.[11]

With all that said, it is possible to have a meal at McDonald's that at best isn't too unhealthy, and at worst won't do much damage to your diet (this is why publications like Eat This, Not That exist after all). Nonetheless, you still shouldn't eat fast food on a frequent basis like Chris does, and knowing him, it's also very unlikely he frequently chooses the less-fatty items on their menu. 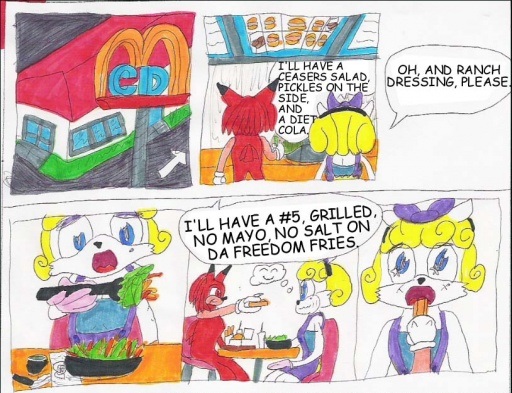 "Have some fistfull fries!"

In 2009, McDonald's held a Monopoly promotion. Chris claimed to not care about it in a video, only to create more accounts later and enter 65 codes from purchased goods, which may seem familiar to seasoned CWC watchers.

7 codes (6 of them from purchased things)

Chris as the Hamburglar, apparently.

At least it hides his tits.

In the beginning of October 2010, Chris apparently remembered Jackie telling him that she liked his cosplay videos. Following a scandalous cosplay video over two weeks before, Chris decided to continue his act with McDonald's characters.

The next day, Chris attempted to cosplay Grimace. Needless to say, the Grimace costume he made was beyond recognition. Whilst wearing the costume, he delivered a speech about autism and bullying before breaking out into song. It is likely that Chris got this idea from an episode of Family Guy in which Lois dresses up as The Grimace - Peter responds with a comment that Grimace is retarded.