List of things Chris has shoved up his ass 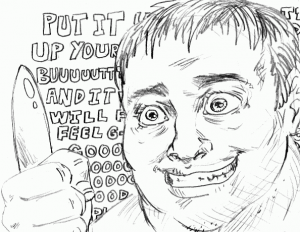 One can only imagine what wonders this does for his already-terrible bathroom issues.

This list only covers what Chris has admitted shoving up his ass. Given that he was hesitant to admit this much, out of fear that he will be misinterpreted as a homo, we can only imagine what items he has experimented with that he's too ashamed to confess.

Things Chris has shoved up his ass