From 17 June 2010 to 1 July 2010, Chris discovered, abused, and lost a way to put videos on the web without reliance on YouTube. For two frantic weeks, Chris churned out animation after animation until he was temporarily banned. But regardless of where Chris uploads his videos, the TheCWCvilleLibrary will provide mirrors and our team of Christorians will provide transcripts and summaries.

A lot of his Flipnotes have been deleted from the Flipnote Hatena site, either due to pornographic content or, to Chris's chagrin, including your real name. On May 31, 2013, with Hatena shut down, all of his flipnotes are now gone. 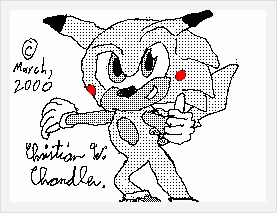