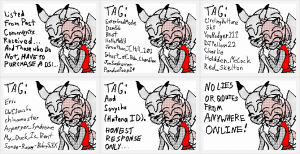 Edit Me is Chris's ninth animation posted to the Flipnote Hatena on 27 June 2010.

The Edit Me begins with an artist creating a relatively blank character template and tagging another user. The tagged person must draw characters onto the template left by the starter, converting it into a picture of their own, and then include a tag of another user, starting a chain of individual drawings based on the same template. Being Chris, he added in everyone's favorite Electric Hedgehog Pokémon and his wife, but in a creepy humanoid form, as a result of his bad drawing skill and the human-shaped template.

Chris then goes on to tag a long list of people, most of them obvious trolls, asking for HONEST responses only. He ends the animation with the phrase "I HAVE SPOKEN!" The result is highly reminiscent of an end credit roll.

Unsurprisingly, Chris isn't tagged in the chain; he added his characters in completely uninvited, once again proving he has to shove his fat ass into everything he sees. Somewhat more baffling is the fact that Chris has this note locked for editing, meaning that even if you did download the animation to a DSi, you would not be able to edit it. While this is consistent with Chris's feelings on people altering his work, it makes no sense at all in the context.

As in Don'tGetTrolled!, the majority of content in this flipnote is not created by Chris. As such this transcript will only concern itself with the parts Chris added.

[At 0:24, a picture of Sonichu and Rosechu, drawn using the template, appears. A very long message is displayed piece by piece in the margin.]

Listed from Past Comments Received... And Those who Do Not, HAVE TO PURCHASE A DSi...

NO LIES OR QOUTES FROM ANYWHERE ONLINE!