A Something Awful Sycophant Squad (SASS) user going by the name of the aforementioned presenter used the alias of Jimmy to troll Chris[3], claiming to be the true original creator of Sonichu and Rosechu, selling counterfeit Sonichu merchandise, and aiming to launch the comic in Europe around September—December 2008.

Jimmy Hill's version of Sonichu was a homo, with Blake as his boyfriend and Rosechu his gal-pal. He revered Mary Lee Walsh as his mother and Jimmy Hill as his father, and battled Chris-Chu's giant jerk-bot. Hill also sold OFFICIAL merch, including a muscle bra "suitable for geriatric females and overweight men who are uncertain about their sexuality". 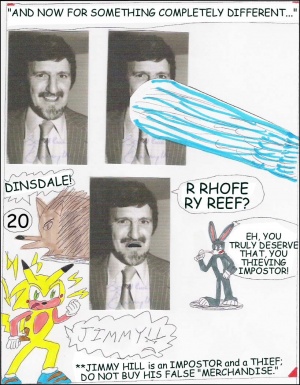 In September 2008, Chris first responded to the unauthorized merch sales, referring to him as "Jerry Hill."[4][5]

The next month, Chris raged more openly against Jimmy Hill, pointing out that Hill's work was an obvious ripoff of his, and ignoring that he's not one to talk regarding ripoffs.[6]

He and PandaHalo planned to sue Jimmy,[7] and when she said "i hope somebody cuts off his penis" in IRC, Chris made the statement, "I hope he loses his duck."[8]

His fans at ED left a sign reading "ENCYCLOPEDIA DRAMATICA ♥ JIMMY HILL" on Chris's lawn on Halloween 2008. A year later, he tore up the sign on YouTube[9].

During the Miyamoto Saga, Chris grandiosely stated, "I declare another step forward in the Sonichu Game project, and the downfall of that Impostor, Jimmy Hill. I have also informed them of Sarah Mitchel's message of Sega of Japan leaning to pay the impostor, but Takashi will most certainly step in and avert the mistake from being made. Then hopefully, with their help, I'll be able to claim the copyrights in the UK that should have been mine in the first place. I already had them from the Virginia Library of Congress."

By February 2009, the S.A.S.S. board collapsed and Jimmy's site had gone quiet. Chris wised up and decided that he was no longer a threat, despite trolls insisting that Jimmy had successfully launched his cartoon in the U.K.[10] But when amending the Chris-chan ED page, Chris was enraged at the idea of Jimmy becoming Mayor of CWCville.[11] Chris would "exact" his revenge on Jimmy in Sonichu #10, where Jimmy is struck by a Hyper Beam launched by Chris, knocking his front teeth out in the process.