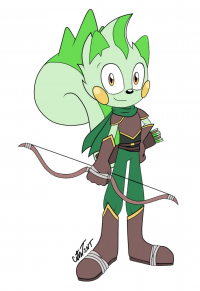 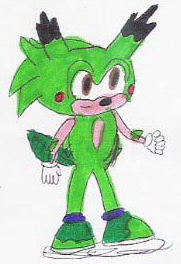 ProjectSNT, aka Courtney or SNT, is an artist made famous for revisiting her old Sonic OC, S.N.T, redesigning other Sonic OCs and characters, and voice acting. Among her artwork is a redesign of Wild Sonichu known as "Wild Sonirisu",[3] a combination of a Sonic character and the Pokemon Pachirisu (an electric squirrel Pokemon with a large bushy tail), included as part of a larger artwork depicting the Chaotic Combo as having more diverse origins than simply being recolours of the original Sonichu and Rosechu.

Courtney intends to ignore Chris's tantrum.[4] Despite this, Chris has continued to stalk her where he has been seen attempting to contact her through liking many of her posts and responding to many others.

A year before the Wild Sonichu redesign, ProjectSNT had done redesigns of Sonichu and Rosechu. Chris approved of those designs, interpreting them as ProjectSNT discovering new species of the Electric Hedgehog Pokémon,[5] even congratulating ProjectSNT on her "fair to good" designs.[6]

On 6 December 2019, the ProjectSNT Twitter unveiled a redesign of the Chaotic Combo.[7] An upset Chris replied, "I only Wish I could like this, but I am really unable to",[8] neglecting to actually explain his issue with the art. Responding to an unrelated tweet with one of his enablers, Chris stated, "I am not replying to this, to move my Reply down the tweet wall, because something Seriously Triggered Me. No, No."[9] (although Chris proceeded to casually make a few more unrelated tweets[10]). Returning to the ProjectSNT tweet chain, Chris replied to enablers asking him what his issue was simply with a reaction gif reading "TRIGGERED.[11]", before casually commenting on other subjects.

A fan asked if he was upset over people liking the Chaotic Combo redesign better than the original, to which Chris denied, saying he was "TRIGGERED BAD" over seeing the design.[12]

Later, during a livestream promoting his custom TSSSF cards, Chris finally stated his reason for throwing a tantrum over the redesign, saying he was bothered over Wild Sonichu having a poofy tail, instead of the original leafy tail, because it meant he wouldn't be able to glide very well.[1] Ironically, the ability to fly with his tail, while canon,[13] is extremely minor even in the comics, as Wild is never directly shown using the power.

A fan tried to persuade Chris he was in the wrong by using his own logic about OCs against him, however, Chris dismissed the message partway through with, "Not now, please."[15] 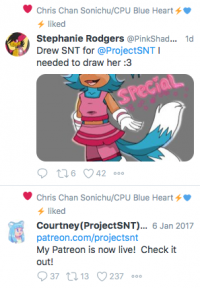 On 23 December, YouTuber Dillin Thomas released a video discussing DMs Chris had sent him about ProjectSNT.[16] In those, Chris stated his belief that SNT had been forced into helping him battle interdimensional evil.

On 4 January 2020, Chris pledged money to ProjectSNT on Patreon.[17] A perk for pledging is to receive an invite to ProjectSNT's Discord server - which Chris took advantage of, suggesting ProjectSNT ignoring him over Twitter had gotten under his skin so much he decided to throw money at her to try getting his foot in the door via Discord instead.

On 12 February 2020, Chris livestreamed himself reading the second half of a fanfic written by Opuscon789, which involved Chris and SNT. Chris got the idea from SNT's YouTube, where she had livestreamed a reading of the first half ten months before[18]); however the fanfiction quickly began making rather unfortunate implications when it began turning sexual despite the significant age gap between Chris and SNT.