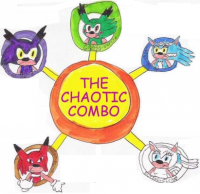 That's right, he's given them a logo. You know, in case he gets a call asking for a merchandising deal. 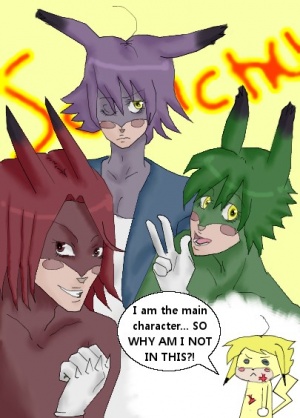 The chaotic combo are STRAIGHT!

The Chaotic Combo were created at the same moment Sonichu and Rosechu were made. When the Chaotic Rainbow flew out of Sonic and Pikachu and hit the female Raichu, some eggs flew out of the rainbow for no clear reason and landed in a variety of locations. These hatched into Sonees and Roseys that were then raised by nearby Pokémon. 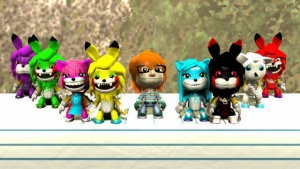 The loving couples and their proud father, as recreated in LittleBigPlanet.

Sonichu and the rest of the Chaotic Combo

Sonichu has a quite close working relationship and friendship with the rest of the Combo, almost to the point where he's a sixth member. He's seen more often with a member of the Combo than they are as a full team by themselves, not to mention that Sonichu has no problem hanging out with Rosechu and her Gal-pals. Moreover, his children are said to play with Wild's own groinspawn. Since he's the only one besides Bubbles who has any aptitude with electric attacks and he also has the ear of the mayor, he may be the de facto sixth member of the group

Blake and the rest of the Chaotic Combo

While shown to be individually more powerful than any of the other members, he turns into a simpering bitch after getting gangbanged by Sonichu and the rest of the Combo and developing a crush on Bubbles. His status in the rest of the clique rose considerably after attending a few birthday parties and becoming Bubbles' gelding. Ironically, Blake was able to get far more evil done as a confident of the Chaotic Combo than he ever did working for Giovanni and Robotnik.

Magi-Chan and the rest of the Chaotic Combo

The other members of the Chaotic Combo seem to freely use Magi-Chan for teleportation services and information about the latest plot device of the week while doing little to return the favor. Strangely, Magi-Chan doesn't seem to resent this frequent badgering for assistance. In his first meet-up with the others in Episode 11 he's actually a bit peevish when people take their sweet time to ask him for his psychic taxi services. This stoic commitment to duty is, to no one's surprise, waived when it's Chris-chan doing the asking.

Like Sonichu, Rosechu is frequently seen hanging out with the other two female members of the Chaotic Combo. Unfortunately, as she's but a mere female character in Sonichu she's only seen interacting with them in warm scenes of domesticity. Stuff like shopping at the mall, hanging out at the beach, or stripping nude.

Punchy initially develops a crush on Angelica after she attends to him after getting owned by Blake's hoverboard. This infatuation only lasts until he starts IM-ing Layla Flaafy, whereupon he immediately forgets his years-long feelings for Angelica.